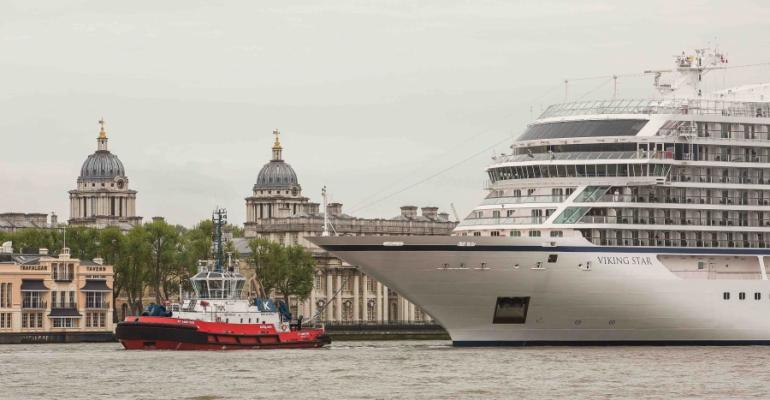 Viking Star will head to the Americas in September 2016. The ship is pictured in London (Photo: Viking Ocean Cruises)

Viking Star will reposition from Europe on a Viking-themed crossing from Bergen, Norway, to Montréal, first touching the Americas at L'Anse aux Meadows, where Viking explorer Leif Eriksson established the earliest known European settlement in the New World. The 15-day itinerary includes the Shetland and Faroe islands, the Saguenay region and Québec City.

From Montréal, the ship will sail to New York on a 13-day cruise that includes Québec City, Prince Edward Island, Halifax, an overnight in Boston and a rare crossing of the Cape Cod Canal.

From New York, Viking Star will head down the Eastern Seaboard to the Caribbean on a 15-day cruise with destinations including Newport, Baltimore, Norfolk and Port Everglades (overnight), the Turks & Caicos, Antigua and St. Thomas, before arriving at San Juan.

The Puerto Rican capital will be Viking Star's base for its Caribbean cruises that visit the British, French and Dutch cultures of the Lesser Antilles. Departures begin Oct. 28.

On Feb. 25, 2017, the ship will sail from San Juan back to Europe on an 18-day crossing to Barcelona. Ports include St. Maarten, Madeira, Casablanca, Cádiz and Valencia.

'We launched our ocean cruises in Europe earlier this year, and just as the Viking explorers before us, we are now looking across the Atlantic for new discoveries,' Viking Cruises founder and chairman Torstein Hagen said.

Viking introduced its new Americas itineraries with two-for-one pricing. Fares for the 11-day Caribbean cruises, for example, start at $2,999 per person.