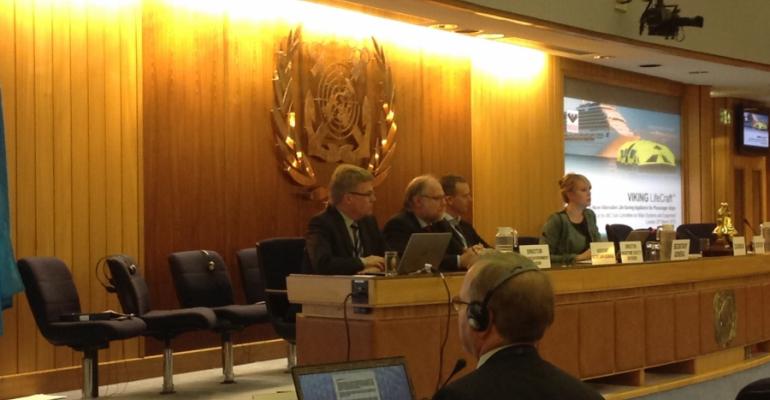 VIKING Life-Saving Equipment has taken an important step on the road to gaining approval for the VIKING LifeCraft, its innovative alternative life-saving appliance (LSA) for passenger ships.

The concept was presented to the International Maritime Organization’s Sub-Committee on Ships Systems and Equipment in London last Wednesday, with the full support of the Danish Maritime Authority.

Acknowledging the co-operation between the two, Fraende told Seatrade Insider: ‘This is changing the boundaries on what life-saving appliances can have on ship design.’ He referred to it as  a ’long odyssey of development that started 10 years ago.’ Fraende began working on this project in 2005.

Full prototype testing of the LifeCraft is nearly complete. The audience was told the system has been performing in line with expectations. Fraende said the approvals process for the alternative LSA had been a challenge but added that progress was made by taking a practical approach to IMO guidelines (MSC 1/Circ. 1455, MSC. 1/ Circ. 1212 and SOLAS III/38).

VIKING Life-Saving Equipment aims to secure the first approvals from flag states by the end of 2015.

The LifeCraft design initiative has its roots in the EU ‘Safecraft’ safe abandoning of ships project, started in 2004. Essentially, LifeCraft is a hybrid lifeboat/life raft system, designed to combine the advantages of both solutions. Self-propelled, with four battery-powered electrical motors, one at each corner, each survival craft unit is fully equipped as a lifeboat, with a fire retardant canopy and a simple steering system that offers a high degree of maneuverability.

Each craft has capacity for 200 people in an ergonomically-designed and secure seating arrangement that the supplier said is also intuitive and flexible.

Tests have demonstrated that the construction is highly stable in sea states up to Beaufort 6+, Fraende pointed out, while rapid acceleration and high bollard pull makes it easy to pull clear of the mother vessel. The launching and embarkation arrangements mean that four units can be stored on deck in a storage container or integrated into the shipside, operated by gravity and stored mechanical power to provide a controlled descent with minimal handling by crew members.

Each LifeCraft system has four ‘escape ways’ with capacity to evacuate 1,816 people in 30 minutes. However, Fraende pointed out that as a four LifeCraft arrangement would have maximum capacity for 800 persons, there is a capacity safety factor of 2.27, and therefore 800 people can be evacuated in 15 minutes.

‘Our focus has been on ensuring operational safety,’ Fraende told Seatrade Insider in an interview prior to the IMO presentation. ‘This has been achieved by a combination of controlled, storage, technical simplicity, a simplified operation and easy maneuvering of the craft,’ he added.

Henning Luhmann stressed the importance of innovative products in achieving a successful cruise ship design and in delivering high levels of safety, efficiency and guest satisfaction. He said a large number of lifeboats could be replaced by the LifeCraft solution, which would be attractive to both shipyards and shipowners.

‘LifeCraft is a big step forward. The huge reduction in equipment would mean less maintenance and repair, less risk of injuries to crew members, and it would have a major impact on the lay out of the ships, including deck heights and steel structures,' he said.

Luhmann said the selection of LSAs had to be made within the first three months of the design process. The expectation that approvals would not be in place in time had led Meyer Werft to shelve plans to use LifeCraft on one cruise newbuilding already.

‘IMO needs to do its homework,’ he told the audience. ‘The approvals process for new technology is too slow.’

Follow-up questions focused on weight, battery life and performance under difficult conditions. Fraende confirmed the LifeCraft offers a doubling in capacity in equivalent weight terms and that life expectancy time for modern batteries is 10 years.

Kent Molsted Jorgensen, VIKING Life-Saving Equipment manager, rules and regulations, commented: ’As we move towards getting approval for this innovative life-saving system, we need to raise awareness of its capabilities and advantages within a wider community. I am greatly encouraged by the universally positive response from Sub-Committee delegates.’