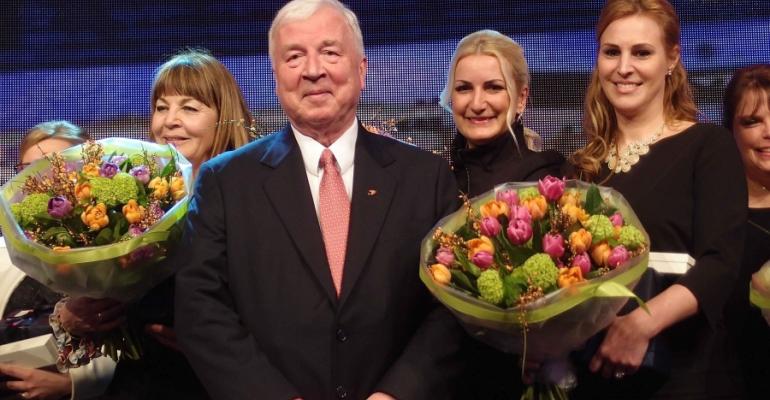 Viking chairman Torstein Hagen with some of the 12 godmothers
Viking River Cruises, already the world record holder for vessels being inaugurated in a day, ushered in a dozen more river boats during joint festivities in Amsterdam and Rostock on Tuesday.

A dozen notable Viking employees served as godmothers for eight boats in Amsterdam, stretched in two rows of four each out from the pier, and by video for four boats at Neptun Werft in Rostock. The vessels were festooned with red and white balloons and, under a light drizzle in Amsterdam, naming ceremony guests stood under red umbrellas, some dressed in the bunad, or Norwegian national costume.

Viking chairman Tor Hagen joked that of all the Norse gods the company used for the names of its vessels, perhaps Viking should have called on the rain god.

Hagen also praised Neptun Werft for a 'phenomenal' job in building the 10 Viking Longships and two slightly smaller vessels customized for the shallow Elbe River. And he thanked all the Viking crew, saying: 'There is nobody like you in the river cruise industry and I'm very proud to be affiliated with you.'

For the first time in company history, Viking selected employees to serve as godmothers.

One by one, each godmother—escorted by her vessel's captain and a young 'Tinkerbell' clad in green—used the words: 'May your passengers and crew always be safe, and may you always have a hand's width of water beneath your keel' to name her vessel.

A chorus of ships' horns, sprays of sparklers from the top decks and plumes of water from a fire boat capped the ceremony. A lavish reception and dinner accompanied by classical music and opera singers followed in the elegantly decorated Passenger Terminal Amsterdam.

Just prior to the festivities, Hagen told reporters Viking River would inaugurate six more river vessels in 2016 and holds options to build 18 more.