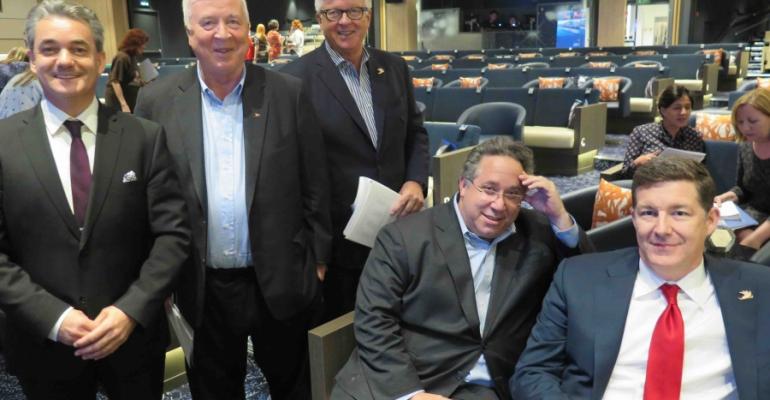 Having introduced its second ship, Viking Sea, and with four more on the way, Viking Ocean Cruises plans a 'worldwide footprint,' senior executive Jeff Dash said on board.

The just-introduced Viking Sea follows 2015's Viking Star. Viking Sky is due in February 2017, Viking Sun in October 2017 and Viking Spirit in June 2018. An unnamed vessel is to come in September 2020, or possibly earlier, Dash said. All are from Fincantieri.

The recent announcement that Viking Sun will chart a 141-day world cruise has received enormous support from past passengers. According to Dash, Viking doesn't anticipate having to sell any segments. Destinations, he added, will multiply as the fleet does.

Viking's concept isn't designed around the ship, but to highlight the experience of the destinations.

'We will never take anyone someplace and then charge you to see it,' Dash said. 'If we bring you to London, we shouldn't charge you for a shore excursion to get there.' Viking includes an excursion at each port; additional, extra-charge choices are available.

The same philosophy holds true for dining, which Viking considers 'part of the experience.' So there's no extra charge for alternative restaurants or room service.

Like its identical sister Viking Star, the new Viking Sea is beautifully outfitted in contemporary Scandinavian design, with all-veranda rooms and a bevy of gorgeous details. Books are available everywhere, free for the borrowing. Frank Gehry Cross Check chairs are found in the glass-topped Wintergarden. An Edvard Munch lithograph is amid the Scandinavian artworks—paintings, photographs, glass, needlepoint, sculptures—throughout the ship.

Made-to-order thin Norwegian waffles are served with sweet brown goat's cheese, flaky pastries, fresh berries and open-faced sandwiches in the deli, Mamsen's. There's no charge for deli items or food in any of the four restaurants, including The Chef's Table with a tasting menu and wine pairings and the Italian spot, Manfredi's.

There's an infinity pool aft, and the LivNordic Spa offers saunas, a thalasso pool and snow grotto, all available to use without purchasing a treatment. A sea day might offer three enrichment lectures by guest experts on topics from art to law to politics.

Despite its numerous luxury touches, the aim isn't competing in the luxury cruise segment but, instead, the premium segment, where ships are getting too large for some travelers. 'With a 3,500- or 3,600-passenger ship, it's very hard hard to deliver the destination,' Dash said.

Dash claims when Viking's inclusives are added up, they total about $175 per day.

For a Northern Europe cruise, the 'adjusted' price (including air) per day in a starting-level veranda stateroom, 270 square feet, is $442. According to Viking's reckoning, figuring in the cost of items that are included on its ships, a Holland America Koningsdam per diem would be $426 in a starting level veranda room, 228 square feet, while Princess Cruises' Emerald Princess works out to $485 in a 231-square-foot room.

'We know the economies of small ships from operating in the river business,' Hagen said. When Viking branched into the ocean business, it didn't add a lot of overhead and used, largely, its same executive team with some notable additions such as senior luxury cruise veteran executive Erling Frydenberg and seasoned naval architect Jon Rusten.

Plus, Viking has leveraged its brand. Hagen asserts his company has higher brand recognition today than Cunard.

He isn't ready to say 'mission accomplished' for his 2013 vow to 'reinvent' ocean cruising, but with two well-received ships in service Hagen is feeling good enough about the progress that he's letting himself crow a bit.

During Viking Sea's naming cruise this week, he praised his ocean team—among them, Dash, Frydenberg and Rusten—and distributed a glossy booklet that extols Viking's features and its value compared to other lines. The booklet includes gushing reviews from Cruise Critic, Condé Nast Traveler and Berlitz, and says 97.2% of Viking Star passengers have rated their cruise above or far above expectations.

When announcing its ocean-cruise strategy in 2013, Viking promised a destination focus, small ships at a great value, no 'nickel and diming' and to be true to market of age 55-plus travelers instead of trying to be everything to everybody. Hagen is proud the company is doing all these things.

And to have grown so rapidly as an independent, privately held operator is an accomplishment in itself.

At Viking Sea's naming ceremony, godmother Karine Hagen welcomed the new relationship with the Industrial and Commercial Bank of China, which had representatives on hand.

'We have very good access to capital. We haven't a need for capital,' Torstein Hagen told Seatrade Cruise News, when asked if going public might ever be a consideration. Sooner or later, he continued, going public 'might happen, but we don't know.'