Viking Sea is handed over by Fincantieri's Ancona yard 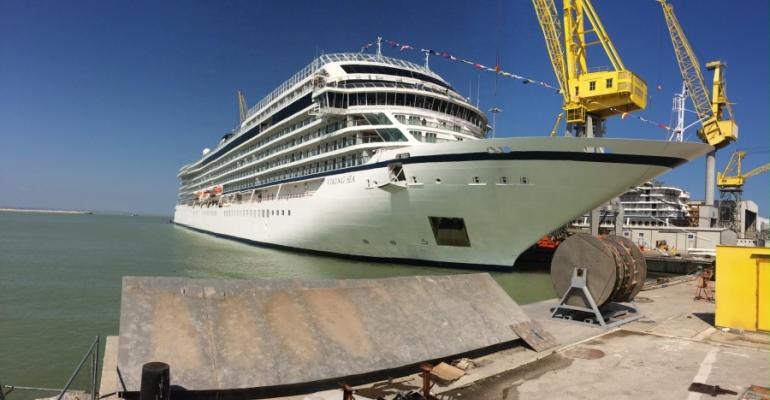 Updated with comments by Viking chairman Torstein Hagen. Viking Sea, the second of six ships Viking Ocean Cruises has ordered from Fincantieri, was delivered Thursday at Ancona. Just a day ago, the Ancona yard floated out the next ship, Viking Sky.

'What a remarkable 12 months this has been, launching our first ocean ship, taking delivery of our second ship and preparing for the final outfitting of our third ship. I am proud of everyone at Viking and Fincantieri for their contributions,' Viking chairman Torstein Hagen said.

'As we take delivery of Viking Sea we now double Viking’s ocean capacity, which demonstrates how enthusiastic our guests are for destination-focused cruises,' he added. 'We look forward to further increasing our presence next year and the years after that.'

The 47,800gt Viking Sea has capacity for 930 passengers in all-veranda staterooms. The ship was designed by seasoned naval architects and engineers, and the interiors were created by London-based SMC Design and Los Angeles-based Rottet Studios. The look is modern Scandinavian.

The ship has two pools, including an infinity pool in the stern, and a spa with a sauna and a snow grotto.

On April 3 Viking Sea is scheduled to sail from Istanbul and will make its way through the Mediterranean and into the Atlantic for christening festivities on May 5 at Greenwich on the Thames River. Then the shipwill spend its maiden season in Scandinavia and the Baltic, as well as the western and eastern Mediterranean.