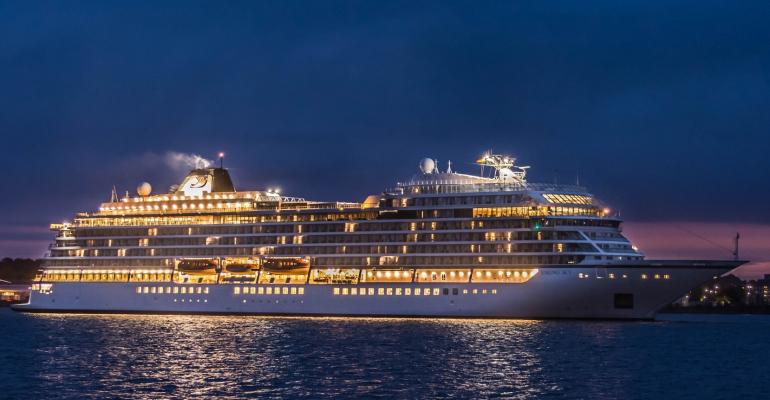 Viking Sky – pictured here in Kiel, Germany, on Tuesday – has made maiden calls at several German and Danish ports this week

Fredericia, a city with about 41,000 inhabitants, is located some 200 kilometres north of Hamburg on the east coast of the Jutland peninsula.

This year seven cruise calls were recorded, and 19 are booked in 2019.

The port has defined 20 calls as its strategic benchmark for 2020, a volume which will now almost be reached next year.

Among the new customers which started calling Fredericia this year are AIDA Cruises and Viking Ocean Cruises which, in addition to this week’s visit by Viking Sky, also called with Viking Sun in July.

With the end of cruise season, many of the traders in Fredericia's 'C-byen' – an innovative area close to the cruise quay – are closing their business for 2018.

'C-byen,' made from ISO Containers, has in recent years developed into a versatile zone with shops for jewellery, handicrafts, regional deli food and other products as well as a gallery, a coffee bar and a photographer. It is a popular spot among cruise visitors and will open again for full operations on April 1,  when Fredericia's season starts.

Following the visit at Fredericia, Viking Sky made a maiden call at Kiel as the last new ship visiting the German cruise hub this year.

Along with Pullmantur, Viking Ocean Cruises is one of two cruise line clients Kiel added this year.

Viking is going to return for three calls next year, including another visit of Viking Sky on March 27.

Viking Sky is currently continuing her cruise to Amsterdam where she will turn around on October 6 before heading to the Mediterranean.