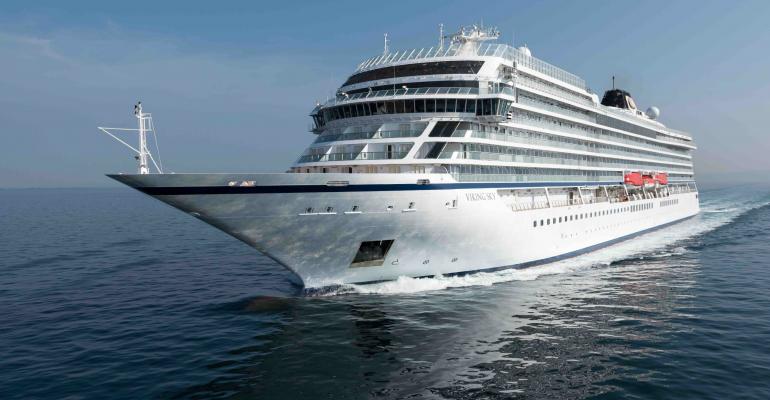 Viking Sky - sister of Viking Sea and Viking Star
Viking Sky, handed over by Fincantieri in late January and due to be named in Tromsø, Norway, June 22, has embarked on its maiden voyage from Civitavecchia (Rome), bound for Barcelona.

'We continue to see a positive response from our guests and the industry, which makes us confident in our future growth,' Viking Cruises chairman Torstein Hagen said. A fourth ship, Viking Sun, is due for delivery in November. All are 47,800gt.

Viking Sun's maiden season features the line's first world cruise. Viking Spirit is scheduled to join the fleet in 2018 and will sail in Australia, Asia and Alaska. A sixth vessel is to be delivered in 2019.

In addition to included excursions, among Viking's special options are tours like 'The Hermitage Behind Closed Doors' in St. Petersburg, offered on the 15-day 'Viking Homelands' itinerary. Participants receive a 'Privileged Access' view of the vaults of one of the world’s greatest art collections.

'Vistas, Vikings & The Village Woodturner,' in Torshavn, Faroe Islands, available on the 15-day 'In the Wake of the Vikings' itinerary, gives insight into daily village life and Viking heritage as participants explore the village of Kvivik, site of a 10th-century Viking settlement.

'A Taste of Provence,' in Toulon, on the 17-day Catalonia to Greece itinerary, features a private cooking lesson at a magnificent 19th-century house in the scenic Provençal countryside from Michelin-star-rated master chef of France Monsieur Bérard.

'Nazareth & The Sea of Galilee,' from Haifa, offered on the 15-day 'Cities of Antiquity & the Holy Land' itinerary, includes key places in the life of Jesus on an excursion through Canaan, Nazareth, Cana, Capernaum and Tabgha.

And on 'King Crab Safari, in Honningsvåg, Norway, during the 15-day 'Into the Midnight Sun' itinerary, participants can set off in a deep-sea raft into Sarnesfjorden to catch their own king crab.

Viking is offering two-for-one cruise fare and free air from more than 150 US cities for all 2017 and 2018 sailings of the 'Panama & Central America' itinerary.