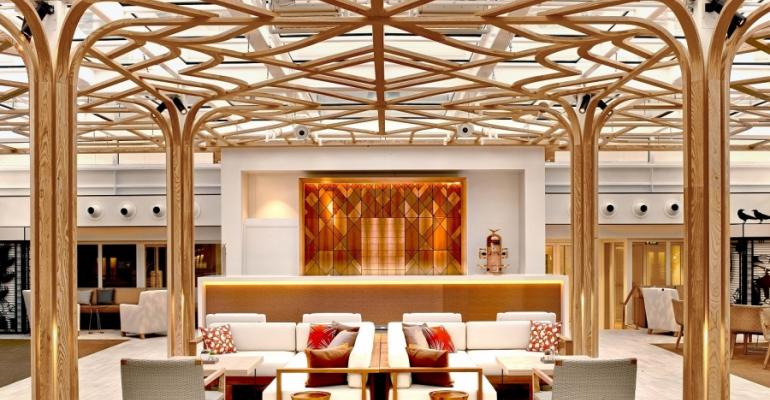 The Wintergarden - blonde wood 'trees' stretch up to the glass ceiling
Viking Star has embarked on its maiden voyage from Istanbul to Venice, marking the debut of cruising's newest brand, Viking Ocean Cruises.

'Cruising should be about connecting you to your destination—not just taking you to places on a map,' Viking chairman Torstein Hagen said, adding that in 'the race to build bigger ships, many cruise lines have lost sight of the destinations.'

Viking's new ocean cruises, he added, feature smaller ships with smart design that offer an alternative to the megaliners. And destinations will be the focus, with Viking's privileged-access excursions and on-board enrichment.

The 47,800gt Viking Star carries 930 passengers in all-veranda staterooms. The style of the ship is light-filled, with modern Scandinavian décor and details incorporated to pay homage to Nordic heritage and to help passengers immerse themselves in local surroundings, Viking said.

A glass-backed infinity pool cantilevered off the stern gives unobstructed views; indoor-outdoor spaces offer more options for alfresco dining than other vessels of its size; huge windows and skylights blur the lines between inside and out; and a wrap-around promenade deck is reminiscent of bygone ocean liners.

In the two-deck Explorers’ Lounge at the bow of the ship, the décor was inspired by ancient Viking trade routes and navigation methods. Imagery of star constellations and astronomical maps are complemented by antique globes, astrolabes and sofas with cozy pelts.

The spa emphasizes the Scandinavian holistic wellness philosophy, from the Nordic ritual of the hydrotherapy pool and the first snow room at sea to materials inspired by Scandinavian nature including Swedish limestone and black slate, juniper and teak wood details and cast iron.

In the Wintergarden, blonde wood 'trees' stretch their branches up to the glass ceiling, forming a lattice canopy over a serene space for afternoon tea. And in the Viking Living Room, a geometric garden was inspired by the wild lichen of Norway’s Finse Mountain Plateau.

Longer stays in port are featured. The enrichment program includes talks by local experts and selected lecturers in The Theater.

Dining options include the World Café, featuring global cuisine with live cooking and open kitchens; Mamsen’s for Norwegian deli-style fare, according to the recipes of Hagen’s mother, Ragnhild, otherwise known as 'Mamsen'; and Manfredi’s Italian Restaurant, highlighting Tuscan and Roman cuisine. In the Kitchen Table, the high-tech space offers cooking classes featuring regionally inspired dishes and culinary techniques; at night it transforms into an interactive dinner experience with fellow guests and Viking’s chefs.

Cruise fares include a guided excursion in each port.

Among the additional-cost, privileged-access experiences are a private visit to Istanbul's Hagia Sophia by night followed by refreshments in the courtyard of the nearby Ayasofya Hürrem Sultan Hamami, a Turkish bathhouse. Cooking with a countess in Venice takes place in the palace home of Contessa Lelia Passi, while a Normandy countryside cheese and brandy tasting features lunch in the village of Pont L’Évêque amid the calvados barrels of Les Tonneaux du Père Magloire restaurant.

In Norway, passengers can kayak in a fjord or make a home visit in Haugesund for tea with a local garden designer and architect in an 1884 wooden house.

Viking Star was handed over by Fincantieri's Marghera yard on March 28 and is due to be christened in Bergen as part of a city-wide ceremony on May 17, Norwegian Constitution Day.