Viking Star is named 'at home' in Bergen 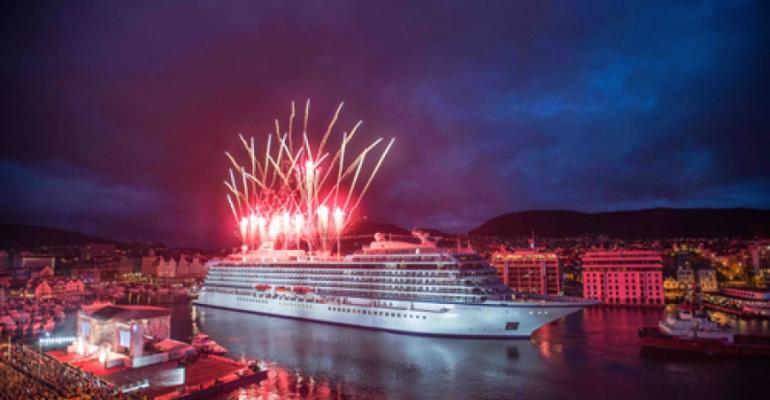 Capping a Constitution Day of parades, parties and flags, thousands of Norwegians and international visitors packed Bergen's waterfront for Viking Star's patriotic naming amid a huge concert and fireworks.

Norway is a nation of great explorers and seafarers, from the Vikings to Amundsen, Nansen and Heyerdahl. And Bergen launched many noted shipping lines and vessels, along with the career of Viking Cruises chairman Torstein Hagen.

'It's a great day for Bergen as a seafaring city,' Mayor Trude Drevland, the godmother, said before sending a bottle of champagne smashing against Viking Star's hull.

The ship flies the Norwegian flag and is registered in Bergen, its homeport.

The festivities were highlighted by a concert of international stars who all hail from Bergen—Norwegian soprano Sissel, actor Bjarte Hjelmeland, singer-songwriter Sondre Lerche, violinist Charlie Siem (the son of shipping executive Kristian Siem, who ran Norwegian Cruise Line) and comedy duo Ylvis ('What Does the Fox Say?').

They performed on a stage just in front of Viking Star, anchored in the harbor.

'Certain words you shouldn't use easily. "Love" is one. I happen to love Bergen,' Torstein Hagen told several hundred VIP guests at a dinner in Grieg Hall before the naming ceremonies.

The fjord city is where Hagen, 72, was hired to run Bergen Line (Bergenske Dampskibsselskab) when he was 33. That company was a partner in Royal Viking Line, whose first ship, Royal Viking Star, was an inspiration for Viking Star.

'This ship is a circle that's closed,' Hagen said.

As it happened, the former Royal Viking Star was in port, too; it now sails as Black Watch for Fred. Olsen Cruise Lines.

Amid the crowd estimated at 20,000 people were hundreds of VIPs including Janice Farrar-Titus, whose late husband, Warren Titus, was the founding president of Royal Viking Line.

'Royal Viking Line was a very special company with a loyal following of employees and passengers. If Warren were alive, he would love to see the Viking Star reborn,' Farrar-Titus told Seatrade Cruise News.

Giuseppe Bono, ceo of Fincantieri, Viking Star's builder, was on hand, along with Silversea Cruises chairman Manfredi Lefebvre d'Ovidio, a close friend of Hagen's. Former Carnival Cruise Lines president and ceo Bob Dickinson, who attended with wife Jodi, called the naming 'Spectacular!' (And he has seen a few.)

Cruising is about destinations but also about the origins—the homeport, and Bergen is especially credible in that the ship is also flagged here, observed Carsten Wiebers, global head, maritime industries, KfW IPEX-Bank, which provides financing for Viking's river cruise vessels built in Germany.

'To create a consumer brand in a capex-heavy industry is quite an accomplishment,' he said of Hagen's new ocean cruise line.