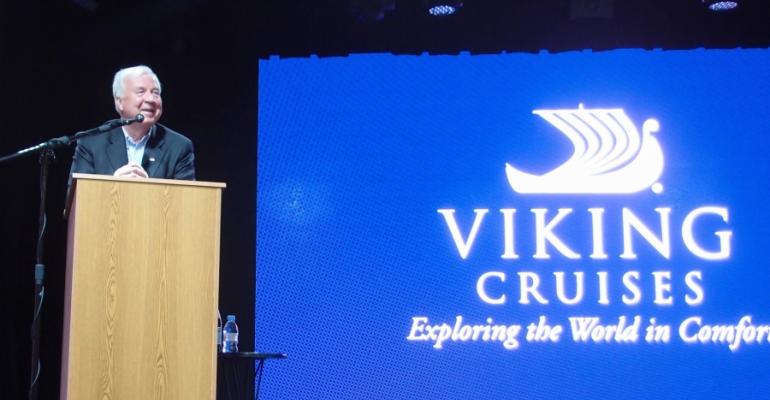 The delayed delivery of Viking Ocean Cruises' third newbuild is 'not as a result of our actions,' Viking chairman Torstein Hagen told media aboard the new Viking Star.

Last week Viking announced the third ship will be delivered in 2017, not 2016, as planned.

Hagen said Viking Ocean Cruises is 'currently building three or four [ships] with options for another two. Whether they will be exercised, I don't know.'

Also, the company swapped the names of the second and third ships.

So, now, the second ship, which has been under construction at Fincantieri's Ancona yard, will be called Viking Sky (instead of Viking Sea) and is due to be delivered March 28, 2016. It is 60% completed.

And Viking Sea (originally called Viking Sky) will come in February 2017 from the Marghera yard near Venice, where Viking Star was built, with finishing at Ancona.

'They had issues with the Venice yard so they have to finish the ship in Ancona,' Hagen said at a news conference where a company spokesman added the yard had approached Viking about rescheduling.

The Marghera yard, the spokesman noted, is designed to build larger ships, while the Viking size (47,500gt) 'fits perfectly' in Ancona.

Viking had notified passengers disrupted bookings would be accommodated on other sailings. Hagen told media 72% of Viking Ocean Cruises' inventory is booked through September 2016 and 52% through December 2016.

The trio of Viking Ocean Cruises vessels will be identical. 'We've pretty much hit the bull's-eye,' Hagen said of Viking Star, so why change?

The elegant, contemporary Scandinavian decor will be the same. Otherwise, only minor tweaks are envisioned.

In the accommodations, for example, the pairs of 100 and 220 electrical outlets beside the bed will be raised from near the floor so they're more visible and closer to the bedside table to facilitate the overnight charging of mobile devices. And the cabin lighting will be adjusted.

'The ship is beautiful,' he said, adding Bono 'had the courage to say, three years ago, "We are prepared to bet on Viking."'

The Italian government facilitated financing, and Hagen thanked SACE and the Italian banks that participated.

This year Viking expects to carry 300,000 passengers across its ocean and river fleets, over 2.5m cruise days.

During the March naming festivities for a dozen Viking River Cruises vessels in Amsterdam and Rostock, the Viking chairman indicated he aspires to a 10-ship ocean fleet. That would be in addition to the 100 river vessels he hopes to field. (Sixty-four are operating now, six are to enter service in 2016, and there are options for 18 more.)

Aboard Viking Star Hagen elaborated that, as a mathematician, he thinks in logarithms. So from a base of one, he thinks of tens and hundreds—10 ocean ships and 100 river ships.

Those numbers would be 'aspirational,' Hagen said, adding: 'You have to have something to aim for.'