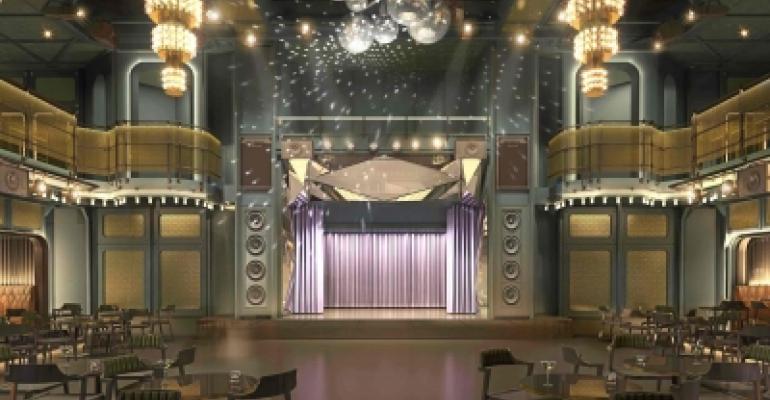 The Manor, one of many entertainment venues aboard Scarlet Lady RENDERING: Virgin Voyages
Virgin Voyages is launching a worldwide casting tour for the company’s inaugural season as it seeks best in-class performers and personalities who will bring to life the experiences created exclusively for the new adult-by-design cruise line.

Scarlet Lady is due to begin sailing in April 2020.

In partnership with RWS Entertainment Group

In partnership with New York-based RWS Entertainment Group, the casting search for for talent to star in first-run original programming begins on March 27 in New York City before traveling to Europe, Australia and back to the US. Rehearsals are scheduled to begin in January 2020.

'Just like our sister brands in the Virgin family, our diverse crew is what makes us great,' said Richard Kilman, VP entertainment for Virgin Voyages. 'We don’t just want a performer; we want incredible people to join us and bring their true selves. Our Creative Collective will be attending auditions as well as directing rehearsals and installing our shows on board Scarlet Lady, so these artists will have the opportunity to work with some of the best in the business.'

The Virgin Voyages Creative Collective and RWS will be casting for shows including a soon-to-be-announced production by award-winning producer Randy Weiner (Queen of the Night, The Donkey Show, Sleep No More) and 'UNTITLED DANCESHOWPARTYTHING,' Sam Pinkleton and Ani Taj’s hype music video disguised as an absurdist style dance party.

Further shows include 'Phantom Folktales,' a collection of song-driven micro plays created by PigPen Theatre Co. that seemingly appear out of thin air throughout the ship, and disappear just as quickly.

'Ships in the Night' is an emotion-filled contemporary experience telling its story with cutting-edge digital projection, interwoven with the authenticity of the human condition, made possible through collaboration with innovative circus company, The 7 Fingers.

'RWS prides itself on being a company of bold makers and mold breakers, which aligns with the game-changing style of Virgin Voyages,' said Ryan Stana, CEO and founder of RWS Entertainment Group. 'We are inspired by the brand’s avant-garde approach to entertainment and the RWS vision, passion and our full-service, turn-key capabilities make aligning with another forward-thinking company a natural fit.'

RWS Entertainment Group will serve as the premiere production services partner for the Virgin Voyages Creative Collective, providing a full scope of production services including the global casting tour, rehearsals at their newly renovated and expanded studios, housing at RWS’ apartment complex and onboarding for all artists hired for Virgin.

Additional information about the casting tour is available at www.brightlightsbigsea.com.