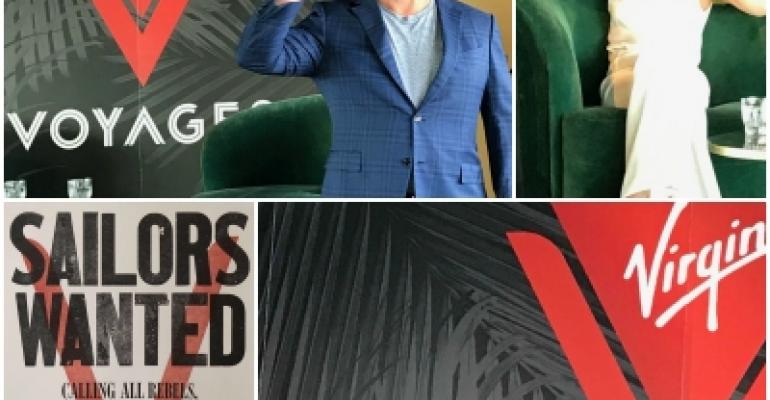 Scarlet Lady will visit Dover and Liverpool in late February, welcoming first mates (travel advisors), media and VIPs for a number of exclusive events before making her way across the pond to her PortMiami home.

In London on Tuesday some 1,100 first mates, media, suppliers and partners got an evening of surprises at a star-studded Scarlet Night event that included a set by Academy Award-, Grammy- and Golden Globe-winning artist and producer Mark Ronson.

Ronson, Virgin Voyages' minister of music, will be creating a series of pre-voyage and shipboard playlists for sailors (passengers), as well as curating the vinyl record selection in the RockStar Suites and the ship’s vinyl and music shop, Voyage Vinyl.

At a media briefing ahead of the party Tom McAlpin, president and CEO of Virgin Voyages, told Seatrade Cruise News about Scarlet Lady’s debut visit to the UK ports.

‘There is a great awareness of the Virgin brand in the UK but not so much the cruise venture so what better place to debut the Virgin Voyages brand in the UK than the amazing white cliffs of Dover, which will look good with a touch of red, and in Liverpool, which has such a historic association with British music,' McAlpin said.

The news of the UK port stops was announced by Geri (nee Halliwell) Horner, aka Ginger Spice, at the media briefing. She has had a long association with Branson, and he is promoting the Spice Girls' next reunion tour.

As a part of Virgin Voyages’ On Deck residency program, Ronson has committed to four performances at The Beach Club at Bimini in 2020. His July 9 poolside performance can only be experienced by those who book the July 5 'Mayan Sol' cruise, which stops at Costa Maya and Bimini.

In addition, it was announced legendary DJ and record producer Diplo will perform at the Beach Club in 2020 as part of the On Deck residency program.

Scarlet Night on board

Plus, Scarlet Night will be one of the signature on-board parties. Conceived, designed and produced by Randy Weiner, the award-winning producer behind Sleep No More, Queen of the Night and The Donkey Show, Scarlet Night promises to be a glamorous occasion.

Groundbreaking music will set the mood as sailors dance the night away at an experience complete with art installations and performances throughout the ship as the night progresses.

An after party will be created by Brooklyn's House of Yes, recently named the No. 2 'Best Thing To Do in the World' by Time Out, and known for their theatre-infused nightclub where a fabulous outfit is a must and highlights include circus spectacles, immersive cinema, cabaret performances and more.