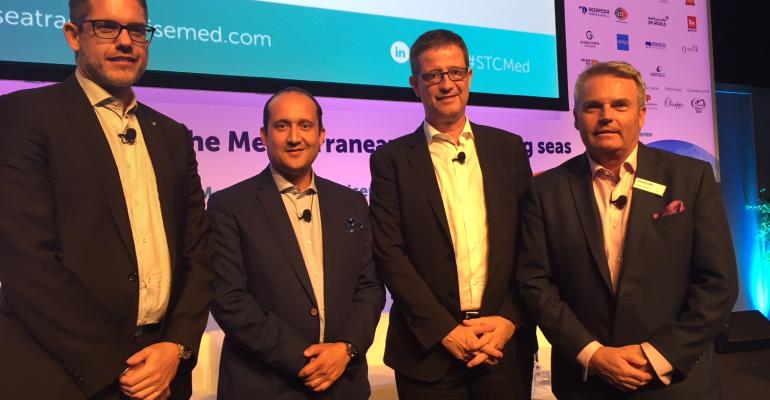 Top executives from a cruise line, a cruise port operator and a tourism ministry shared their visions for the cruise industry in 2030 at the closing panel of Seatrade Cruise Med in Lisbon.

Asked if they were optimistic for future growth and why they are excited about the coming 12 years, Neil Palomba, president Costa Cruises, spoke of the ‘huge opportunities for growth in the Eastern Med.’

Talking about Greece, George Tziallas, secretary general for tourism policy and development, Ministry of Tourism Greece, said the number of tourists visiting Greece has risen from 25m to around 33m in just three years due to opening up of new markets, offering new thematic products and extending the season. 'I see no reason why cruise cannot benefit also from these pillars of our national tourism strategy when the Eastern Med geopolitical situation stabilises,' he remarked.

Duty to create a sustainable product

Palomba said cruising’s vision is 'to make people happy' and the only obstacles in the way of that are environmental and destination management issues.

‘In 2050 the ships we are building today will still be at sea but the people who ordered and built them will not be in the industry, so it is our duty to create a sustainable product for the next generation.’

Sitting on the stage between Palomba and Tziallas, was Stephen Xuereb, coo Global Ports Holding which provides services for more than 7m passengers recahing an annual market share of 23% in the Med. He said whilst the region is important to GPH, ‘we want to replicate what we are doing here in other parts of the world, citing the recent expansion in Havana, Cuba and it terminal business in Singapore.’

He continued, ‘we need to continue developing as an industry as still less than 2% of travellers worldwide are cruisers.’

For the ports, Xuereb said we have to be future-ready too in order to accept the large number of new and bigger ships coming on stream.

Changing the perception of the public that believe cruising is the villain of overtourism in certain destinations is a challenge and one that we all have to work hard at to change attitudes and opinions, commented Palomba.

On the environment the panelists agreed it is not just about stewardship: ‘if we spoil the sea there is no future,’ said Palomba.

Asked what they would each wish for in the future if they had a magic wand, Palomba said he would like every ship to be electric powered to eliminate any environmental obstacles.

Xuereb said he would like to foresee where the growth destinations are going to be so he could invest in those ports now, and Tziallas wished for a speedy resolution of the geopolitical uncertainties in the eastern Med.