Voyager of the Seas undergoing upgrade in Singapore 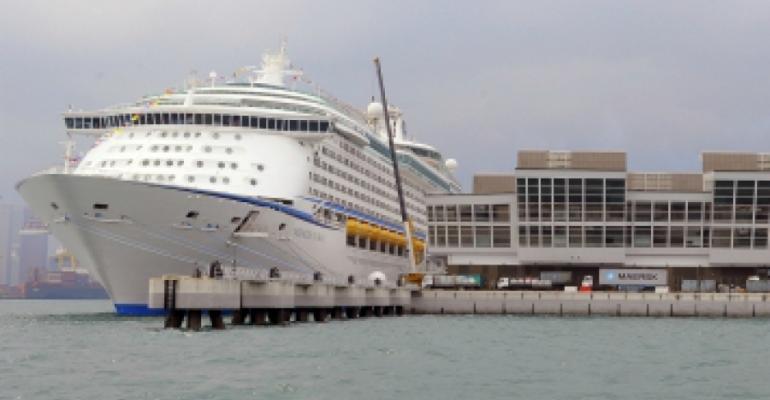 Royal Caribbean International’s Voyager of the Seas is now ten days in to a revitalisation at the 73-hectare Sembmarine Integrated Yard at Tuas in Singapore, the only yard in Singapore capable of accommodating her. She is the first cruise vessel to dock at the new facility which opened for business in August 2013.

Speaking when the deal was announced back in March, Kevin Douglas, Royal Caribbean Cruises’ vp, technical projects and newbuild, praised Sembawang as a competent and efficient 'preferred partner' with which the company was happy to work on another stage of its fleet-wide revitalisation programme. Innovative and popular on-board amenities, debuted on the Oasis vessel class, would be introduced on board the Voyager of the Seas, he said, 'as well as brand new innovative concepts that will greatly elevate the experience of our guests.'

The latest deal also marks a key step for the vast Sembmarine Integrated yard at Tuas which is built on reclaimed land in the south-west of the island. Work has now begun on the second phase of the shipyard’s development, likely to take three to four years. This will involve the construction of two conventional Suezmax docks and a drydock of squarer dimensions for rig repairs and conversions. This will bring the shipyard’s total to seven docks and cement its position as one of the world’s  largest shiprepair facilities.

Eventually, Sembcorp Marine’s shipyard network which includes Jurong, Jurong SML, PPL Shipyard, Sembawang and SOME will all be consolidated on the site. The second phase of development will add another 35 hectares at the site whilst plans for a third phase, details of which have not yet been released, could mean that the vast marine and offshore repair complex eventually covers an area of more than 200 hectares.