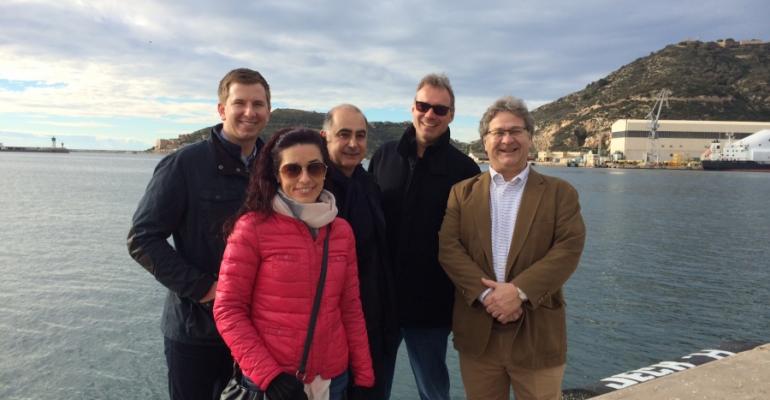 They heard Cartagena’s mayoress, Pilar Barreiro, talk about the city’s history dating back 3,000 years. ‘This is the city where emperor Augustus chose to built one of Europe’s most impressive Roman theatres, it is the city that Hannibal set out from on elephants to fight the Romans and the first city to design and build a naval submarine.

‘As well as history and natural heritage we have a sunny climate, secure neighbourhood and shopping 365 days a year – perfect for tourism.’

Fifteen years ago no cruise ships visited Cartagena but a co-ordinated effort by the city council and port authority has seen cruise business grow to over 100 calls last year and around 140,000 passengers, she added.

This year a similar number of ships is expected bringing more passengers as their size continues to grow.

Seasonality is a key issue that the port and city are addressing, and they are working closely to grow tourism in the winter months.

2015 sees cruise ships calling in Cartagena 11 months of the year, albeit the winter months account for just a handful.

Saga Pearl II was the first ship to visit this year in January and whilst February is bare, March 24 has P&O Cruises’ newest ship Britannia calling at the port’s 560mtr long berth in the  city centre.

Other maiden calls include Quantum of the Seas and Viking Star. P&O Cruises rounds off the season with a December 13 call by Oceana.

Cruise passengers tend to spend time in Cartagena and/or combined with a visit to the region’s capital, Murcia. Today, ahead of the Forum, participating cruise line executives went on a site inspection of the port’s facilities before heading to Murcia and then back to Cartagena for a Segway tour around the city.

Points of interest in Murcia included the Cathedral with its spectacular baroque facade; the Real Casino, a national historic and artistic monument with Arabian-style courtyard, ballroom, tearoom and ladies restroom; and the Sanctuary of  the Virgin de la Fuensanta.

Cartagena itself is a city under discovery. Archaeological excavations continue to unearth Roman remains. Already exposed are the Roman theatre, Roman house, remains of a temple and baths. The National Underwater Archaeology Museum is a must-see as well as the Naval Museum, the venue for the Winter Cruising Forum’s gala dinner Wednesday evening.