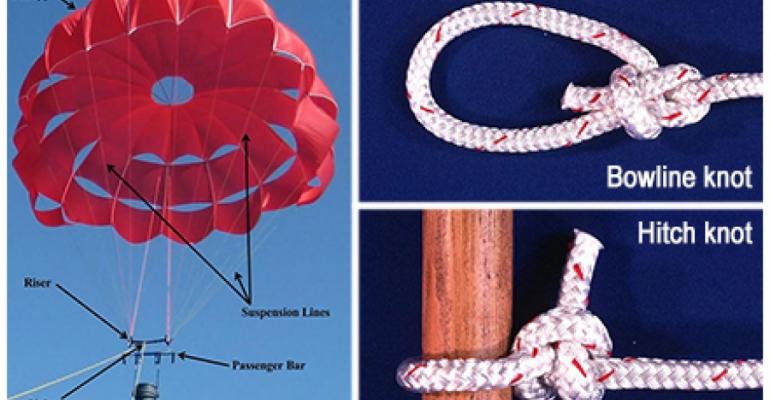 Update adds a comment from Carnival Cruise Lines. In its first investigative report into parasailing, the National Transportation Safety Board found a largely unregulated activity with serious accidents and deaths frequently caused by faulty equipment. The board did not single out cruise-related excursions, however one of the eight incidents it reviewed involved a fatality on a cruise line tour in St. Thomas three years ago.

The NTSB identified a variety of parasailing safety concerns including vessel operators who continued to operate in hazardous wind conditions, the use of inadequate equipment or unserviceable gear and towline strength that was, in some cases, compromised.

Following its investigation, the NTSB on Tuesday issued a safety alert on towline failure, a primary cause of accidents, and recommended that some of the risks associated with parasailing could be mitigated by requiring operators to have at least a minimum level of experience and professional competence.

'An afternoon of parasailing can have tragic results if something as simple as a weak towline, strong winds or a worn harness causes a serious accident,' according to NTSB acting chairman Christopher A. Hart. 'It is crucial that operators are competent and aware of all the risks associated with parasailing.'

The NTSB recommended the US Coast Guard implement a special license endorsement for operators, and called on the National Association of State Boating Law Administrators (NASBLA) to draft a model act that may be used by its membership as a framework for state legislation to reduce the risks associated with parasailing.

The NTSB found parasailing is largely unregulated internationally, with the exception of Queensland, Australia. And in the US and its territories—where an estimated 3m to 5m people parasail each year—there are no federal standards for training of operators or inspection of equipment.

In Florida, where a large number of parasailing operations are located, years of attempts to pass legislation were unsuccessful until May, when lawmakers approved SB 320, which establishes requirements for liability insurance, requires operators to conduct safety briefings for passengers and sets certain operational requirements that address wind speeds, weather conditions and locations. The provisions take effect in October.

Because of the challenges of enacting legislation, the NTSB recommended that a NASBLA model act may provide governmental bodies with a solid foundation to begin the process.

The board also issued a safety alert on towline failure. Tying knots in the towline, the investigators found, may significantly weaken the rope, reducing its strength by as much as 70%.

The NTSB findings emerged from work including the study of eight parasailing accidents in Florida, Hawaii, North Carolina and the US Virgin Islands that resulted in eight deaths and five injuries, including the one in St. Thomas that involved cruise passengers.

In that 2011 incident, a 60-year-old woman died and her daughter, 34, was seriously injured after they were hoisted into the air in deteriorating weather conditions. Their towline parted in high winds, and the women landed hard in the water.

USCG referred the case to the Department of Justice for prosecution of the excursion boat master under the Seaman's Manslaughter Act, and he pleaded guilty to operating in a negligent manner.

Norwegian Cruise Line requires all of its operators to be active members of the Water Sports Industry Association (WSIA), a self-regulating organization committed to the promotion of safety and professionalism in the parasailing industry. 'WSIA requires members to adhere to their stringent operating standards and guidelines,' said Norwegian's AnneMarie Mathews, vp public relations.

Royal Caribbean Cruises Ltd. is in the process of reviewing the NTSB's findings, according to Cynthia Martinez, director, global corporate communications.

She said the company's shore excursion staff performs on-site inspections to personally evaluate tour operations. Plus, 'In our contract with each operator we ensure that they meet the all local laws and regulations, as well as having any and all necessary certifications, licenses and documents required by their country’s government. All of our tour operators must also carry proper insurance that meets the industry standards.'

Carnival Cruise Lines, whose website advertises parasailing in destinations including Key West and St. Thomas, said it only works with operators who are certified by the Professional Association of Parasail Operators, 'a nonprofit organization comprised of reputable and experienced industry leaders committed to the promotion of safety and professionalism in the commercial parasailing industry.'

Princess Cruises does not offer any parasailing excursions, a spokeswoman confirmed, but she was not immediately able to provide further information about why not.

The NTSB safety alert is here, and the full 33-page report is here.