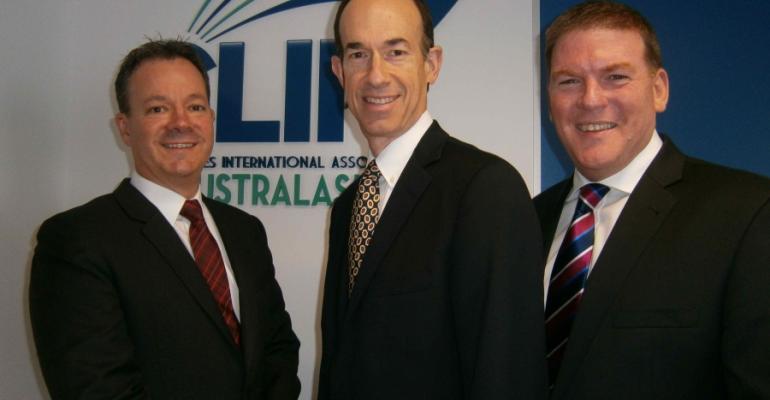 A visit by the global chairman of Cruise Lines International Association is a barometer of the importance of the industry in Australia. That is how CLIA Australasia chairman Gavin Smith introduced Royal Caribbean Cruises Ltd. president and coo Adam Goldstein at a press conference in Sydney Thursday morning.
‘Adam has been a frequent visitor to Australia since the early '90s, but it is exciting for him to come with his CLIA hat on,’ Smith, Royal Caribbean International’s regional vp Asia Pacific, said.
As previously reported, Goldstein will deliver the opening ‘state of the industry’ address at CLIA Australasia’s second annual cruise3sixty in Sydney Friday.
‘The growth in this region, from here up to China, Korea and Japan, is one of the most exciting things happening in the world of cruising today,’ Goldstein said.
‘The growth in Australia has been pretty much relentless,’ he said. ‘The fact that Australia’s annual penetration rate for cruising at somewhere in the high 3% range has eclipsed the United States is an exciting thing.’
However, he said, ‘the cloud in that sunny sky’ is the lack of adequate infrastructure in Australia and in Sydney in particular.
While the industry in Australia over the last 10 years has been ‘very robust,' more infrastructure is urgently needed to realise the country’s full potential.
Goldstein made ‘a maiden voyage’ to Canberra Wednesday where he spoke with both government and opposition officials but said that, while everyone understands the economic benefits of the cruise industry and the need for improved infrastructure, no solution is in sight.
It is ‘within the realm of possibility’ that Royal Caribbean would consider a cooperative cruise terminal development with government based on the experience it has had with other countries.
Some countries want to own and operate their own infrastructure, while others rely on cruise companies to spearhead projects.
Goldstein said the whole cruise industry stands behind CLIA, which has grown considerably over the past few years and now has 60 cruise line members.
Copyright © 2022. All rights reserved. Seatrade, a trading name of Informa Markets (UK) Limited.
TAGS: agents people cruise lines events associations cruise terminals
0 comments
Hide comments
Related