Well along at Brodosplit, Flying Clipper is modeled on largest square-rigger ever built 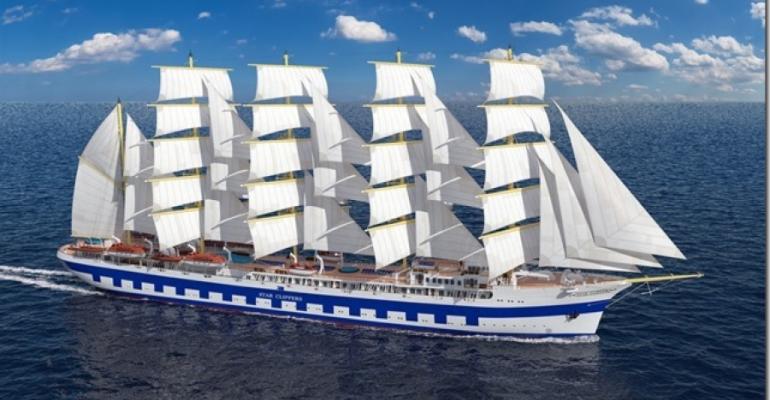 Flying Clipper - modeled on the legendary France II, the largest square rig sailing ship ever built
Flying Clipper is the name of Star Clippers' new ship, under construction for an estimated €100m at Croatia's Brodosplit shipyard, for late 2017 delivery.

Mikael Krafft, founder-owner of the Monaco-based company and his daughter Marie Krafft, director of sales for France, Italy, Spain and Northern Europe, chose the elegant Yacht Club in Paris to unveil the name on Wednesday.

Star Clippers began 25 years ago when Star Flyer, the first ship, was inaugurated in 1991, followed by Star Clipper in 1992, then Royal Clipper in 2000.

'We thought there was no better way to celebrate this silver anniversary than giving our fleet and our many repeat passengers a brand new sailing ship,' Krafft said.

The 170-passenger Star Flyer and Star Clipper were modeled on classic sailing ships of the 19th century, while the 227-passenger flagship Royal Clipper recreated the 1902 German sailing ship Preussen.

Flying Clipper will be a near replica of France II, a legendary and spectacular five-mast barque ordered in 1911 at La Gironde shipyard near Bordeaux. It was the largest square rig sailing ship ever built.

At 8,770gt with space for 300 passengers and 140 crew, the new ship will be Star Clippers' biggest. It will fly the Malta flag.

Flying Clipper will have 35 sails totalling more than 6,350 square meters. It will be the world’s largest square rigger and the largest ship of its kind today.

Among its facilities are three pools, including one that funnels sunlight through the ship’s atrium into the elegantly appointed dining room. There also will be a water sports platform in the stern for use when the ship is at anchor.

The variety of cabin grades include 34 suites with balconies and four luxurious owner’s suites.

A restaurant spanning two decks in the light-filled atrium will accommodate all passengers for open-seating dining and a glass Dive bar for younger guests will occupy several compartments of the ship.

While the ship will have high-tech engines, like its sisters it will rely on wind power and sails whenever possible.

'With this new ship, more than 100 years later, history repeats itself,' Krafft said. 'Building true sailing ships has been a lifetime dream, since I was a child. But it was not easy to find yards for our new ship, as most are more interested in building large cruise ships rather than a sailing tall ship prototype.

'We lost a few years,' Krafft continued. However, the yard in Split, where Flying Clipper is more or less half ready, is 'very motivated,' he added. It's Croatia's largest yard, with 2,000 employees.

'I am very glad this ship, just like the rest of our fleet, will offer our passengers a new alternative to visit ports often untouched by other companies and to avoid crowds, all that in the relaxed atmosphere of a private yacht,' Kraff said.

Flying Clipper is scheduled to start sailing in 2018 with a summer season in the Mediterranean on itineraries from Venice, Civitavecchia (Rome) and Piraeus. For the winter Caribbean season, the ship will sail from Barbados to the Grenadines and the Windward Islands.