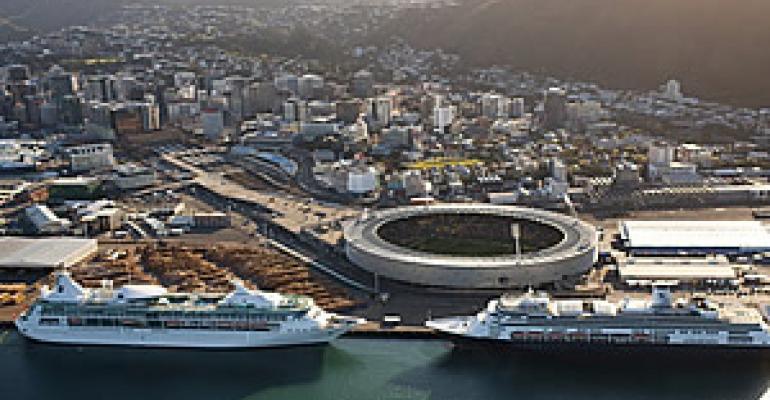 Wellington Harbour will receive Ovation of the Seas

Wellington, New Zealand’s capital city, will hold the fourth annual conference of Cruise New Zealand to be held on August 25 and 26, 2016.
Jo Heaton, trade marketing manager of Positively Wellington Tourism, said her organisation recruits and trains more than 100 volunteer Wellington City Ambassadors to greet and provide information to cruise ship passengers.
She said in the 2015/16 season Wellington is expecting 80 cruise ship visits and 168,000 passengers and in 2016/17 it will be one of the New Zealand ports hosting Ovation of the Seas.
A number of pre- and post-conference tours are planned for delegates who will be encouraged to stay longer in Wellington for the ‘Visa Wellington on a Plate’ food festival held every August. Wellington is known as New Zealand’s ‘culinary capital’ with more restaurants, cafes and bars per capita than New York.
It is also the home of the Royal New Zealand Ballet, the New Zealand Symphony Orchestra, the National Schools of Dance and Drama and the National Opera of Wellington. Four professional theatres operate year-round.
Heaton said the permanent Gallipoli exhibit at the Museum of New Zealand Te Papa Tongarewa will be of particular interest to overseas delegates and everyone will want to see the latest exhibits at the Weta Workshop, a special effects and prop company made famous by New Zealand’s Sir Peter Jackson and his film trilogy 'The Lord of the Rings.'
No trip to Wellington is complete without a ride on the famous cable car which runs from Lambton Quay, with great views from the lookout and easy access to Wellington Botanic Garden.
Lonely Planet Best in Travel 2011 named Wellington as fourth in its Top 10 Cities to Visit, referring to it as the ‘coolest little capital in the world.’
Copyright © 2023. All rights reserved. Seatrade, a trading name of Informa Markets (UK) Limited.
TAGS: ports & destinations associations
0 comments
Hide comments
Related