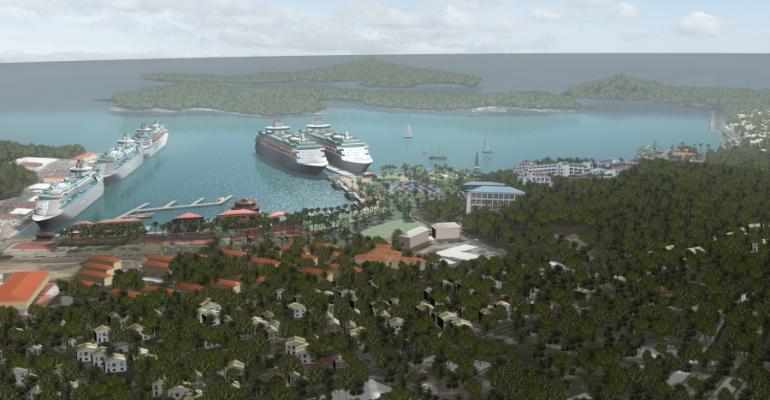 West Indian Co Ltd’s president and ceo Joseph B. Boschulte revealed that planning application has been submitted to the Virgin Islands Department of Planning and Natural Resources to build a new berth at Charlotte Amalie, St Thomas to accommodate two large cruise ships.

The plan consists of constructing a new pier, an upland area for staging, and dredging within specific locations to service two of the largest class of cruise ships.

The new marine facility will have two parallel berths divided by a pier. Each berth is approximately 1,350ft long consisting of a main structure of approximately 1,100ft in length by 66ft wide.

In addition, two mooring dolphins are proposed at the terminus of the pier separated by approximately 100ft each.  The dolphins will connect to the pier via elevated walkways over the water. The upland area will also be designed to allow passengers to quickly access tours and excursions around the island and also serve as a public space for the community.

‘Careful thought and planning have gone into this project to ensure that it is in the best interest of the community, and we have been in close consultation with the Army Corps of Engineers on the best practices we need to implement,’ Boschulte said.

Boschulte also said that the Long Bay Landing development project is good news for the entire territory because it will generate opportunities for entrepreneurship and job creation in the cruise tourism industry and in the ancillary marine and construction industries.

WICO officials also said that a development project with the ability to accommodate larger ships will keep the Virgin Islands competitive with its Caribbean neighbours as wells as inject revenue into the territory’s general fund. ‘We thought long and hard about how this would affect not only our bottom line, but the territory as a whole, because these islands are our home.

‘We had to be sure that any new development would not be at the expense of our environment and our community,’ Boschulte added.

The Port of Charlotte Amalie is a perennial favourite of cruise passengers based on exit surveys conducted by the VI Bureau of Economic Research.

In the past year, competition from neighboring islands has steadily increased as other destinations have invested large amounts of funding in their tourism infrastructure.

Cruise ship revenue accounts for over 70% of the Virgin Islands economy, and trends in the industry show increasingly larger ships coming to port.  ‘The USVI’s ports must adapt or become obsolete,’ Boschulte cautioned. ‘We can no longer rest on our laurels, thinking that our islands are the automatic first choice for travelers. The competition is tough, and our neighbours have watched both the good and bad choices we have made in order to improve their products,’  he added.

The 2011-2012 Business Research and Economic Advisors report states that cruise passenger and crew spending contributed  approximately $340m to the USVI coffers and that there were approximately 6,350 jobs in the territory linked to the cruise industry.