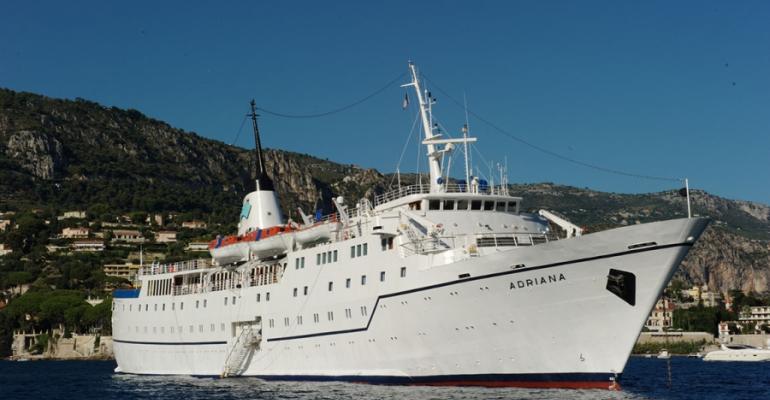 'Cruise from home' is the motto of West Indies Cruise Line, which began southern Caribbean service this month and has switched to a seven-night program.

Passengers can embark Sundays at Trinidad's Port-of-Spain or at any of the other ports: Margarita Island (Monday), Grenada (Tuesday), St. Lucia (Wednesday), Barbados (Thursday), St. Vincent (Friday) and Bequia (Saturday).

Convenient, no-visa cruises for Caribbean residents are the focus.

'We're selling value and convenience—cruise from home. It's right from Trinidad, accessible and affordable,' president Henry Yaniz told Seatrade Cruise News. The Caribbean market is familiar with cruising, but most people think they have to go to Miami to embark a ship, he said.

The start-up line got a boost when Trinidad's TV6 'Morning Edition' host Fazeer Mohammed broadcast a full two hours live from the ship before its first sailing.

During the show Yaniz told about Adriana's international and local cuisine, its spacious main lounge, casino, nightclub, deck parties and theme nights, and its history as a Greek ship built to ice-class standard that had traded in the polar regions as well as the Mediterranean and Europe. He spoke of the captain's experience and safety focus as the former master of a nuclear-powered submarine.

But Yaniz stressed what sets West Indies Cruise Line apart is its convenience for the Caribbean people. The no-US visa aspect is key.

Yaniz told Seatrade Cruise News sailings aboard the 350-passenger Adriana have been very well-received but there was not as much interest in the two-night jaunts from Trinidad to Tobago as the five-night sailings so from Aug. 23, the line moved to an all seven-night program.

And, given that the market is regional, shore excursion sales have been surprisingly high. Last week, for example, 60% of the passengers booked tours of Margarita Island.

Facebook comments from those who've cruised have been enthusiastic, mentioning fun and suitability for families, the varied food, friendly staff and entertainment/nightlife.

Adriana is owned by Russian businessman Sergei Ponyatovsky, chairman of INFLOT Worldwide. The ship is managed by Pacific Naval Register, based in London, and carries mainly Ukrainian crew. It was redeployed to the Caribbean from the Black Sea due to the issues in Ukraine.

Plus, he's looking forward to speaking with European tour operators who sell the Caribbean about possible cruise and tour packages with West Indies Cruise Line.