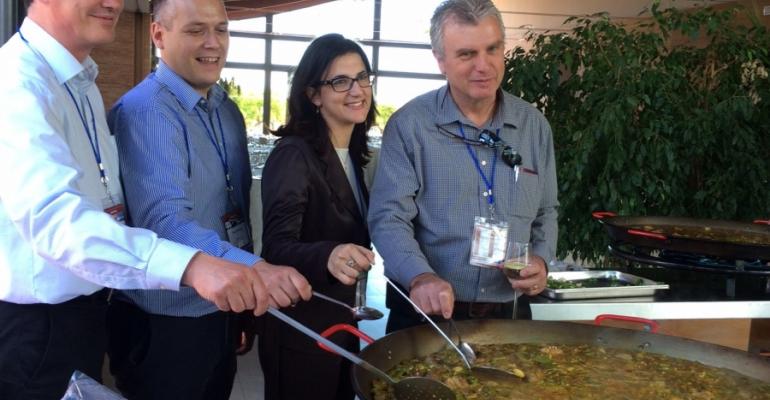 Over 120 participants gathered in Castellon for the 44th MedCruise General Assembly.Located less than an hour's drive north of Valencia and three hours south of Barcelona, the Spanish port has been a member of MedCruise since 2006.

Castellon has various berths plus a 350mtr long cruise berth, around 20 minutes by bus from the city centre.

Situated on Spain's Med coastline, which offers an abundance of well established cruise ports, has proved a challenge for Castellon to attract a significant number of calls. Fred Olsen, Crystal, Windstar and Holland America Line have all featured Castellon on West Med itineraries in the past few years.

Later this year Windstar's Wind Spirit will be the sole cruise call in 2014 but port president, Juan Jose Monzonis and managing director, Roberto Arzo Cubero are hoping that by hosting the MedCruise gathering and bringing several cruise line executives to see the city and its surroundings first hand, might unlock more cruise business.

Miguel Rojo, the port's commercial manager, is in search of that elusive first line to commit to multiple calls. He commented, 'if one cruise brands books a number of calls to Castellon in one year, then others will sit up and take notice of what we have here and our business will grow.'

The appeal of Castellon is that it is not a tourist city so it offers a different draw to some of the larger and more popular destinations in the vicinity.

Yesterday cruise line execs from AIDA, Carnival UK, Costa, Fred Olsen, Holland America, Royal Caribbean and Silversea experienced a taste of what Castellon has to offer, courtesy of a tour by Intercruises.

First up a guided walking tour through the town, and an opportunity to mingle with the local community going about their daily routine. Sights included the Town Hall Square, Cathedral and Bell Tower, then onto the market selling fresh locally grown produce and a welcome break at a street side tapas bar.

A new tour this year and one unqiue to Castellon is a visit to the Porcelanosa factory to see the manufacturing process of ceramic tiles from the raw material stage to finished product which are exported to over 80 countries worldwide.

Finally a visit to Masia Les Casotesa, a villa in the countryside outside the city, where owner, Emma Bordils, and chef Miguel Martí, taught the party how to prepare and cook the traditional paella dish, which was heartedly eaten by the cruise line executives.