Why Quantum is being called a game-changer 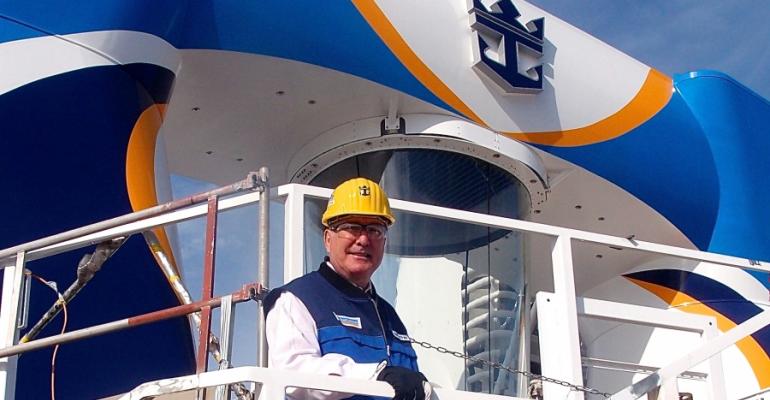 Richard Fain in front of the first-at-sea skydiving simulator, RipCord by iFly

Touring Quantum of the Seas at Meyer Werft this week, top retailers were wowed.

Royal Caribbean is bringing 'the next generation of what this industry needs,' according to John Lovell, president of Travel Leaders Franchise Group and Vacation.com. They're taking the next step, he added, to make cruising more customer-centric, citing examples like 'smart ship' technology that speeds embarkation with the promise of 'sidewalk to ship' in 10 minutes.

'The technology will be a game-changer,' predicted Stuart Rothenberg, president of Alice Travel. Because Quantum is so advanced it will take competitors awhile to catch up, giving Royal Caribbean the edge for the next few years, he said.

'This could attract new cruisers because it's so different,' in the view of Michelle Fee, ceo and co-founder of Cruise Planners-American Express. She added that after Oasis and Allure of the Seas, one might think Royal Caribbean would come up with one or two new things yet 'They've taken this to a new level, and that's pretty hard to do.'

And Michele Duquaine, CruiseOne independent vacation specialist, drew a parallel between Quantum and the iPhone when it first came out: 'This is the newest ship with the best options. I think it's going to sell itself. It's got so many awesome features,' she said.

While cruise sellers gave the overall vessel enthusiastic reviews, many also singled out the high-speed broadband, the multipurpose SeaPlex, the edgy Two70° lounge and Dynamic Dining as some of their favorite aspects. And beyond these elements are first-at-sea attractions like the North Star viewing pod, the RipCord by iFly skydiving simulator and the Bionic Bar with its robot bartenders.

Standing high atop Quantum of the Seas this week, Royal Caribbean chairman and ceo Richard Fain waved his arm in an arc to show how North Star will swing over the sea, affording 360-degree views, and gave his verdict on the skydiving: 'An awful lot of fun.' He's tested the bumper cars in SeaPlex, too.

When it comes to showing off ships, Fain is the ultimate tour guide and enthusiast. He's vetted all the ideas his team dreams up so he's a font of juicy details. Plus, he inspires everybody to excel.

'The challenge for any organization is not to make things incrementally better, but transformationally better,' Fain said. 'It's not raising the bar, but resetting it.'

North Star holds 14 people in what Fain described as a high-quality gondola manufactured in Switzerland. The whole experience lasts about 20 minutes and can be booked via the online Cruise Planner before sailing or on board using the new Royal iQ smartphone app or at one of the freestanding iQ kiosks.

At RipCord by iFly, before plunging into a vertical wind tunnel that offers the equivalent of a 125 mph free fall, participants will view a training video and learn a few hand signals from their instructor—for example, a peace sign means 'Straighten your legs.' It's a minute-long experience.

Fain, who got a two-minute test ride, indicated that was ample and quipped another hand signal is needed for 'How the hell do I stop this thing?'

To enter the nearby SeaPlex, cruisers first sign in at a reception area before walking between the legs of the 30-foot magenta polar bear on deck created by artist Lawrence Argent.

'This is one of my favorite spaces on board,' Fain said after taking a spin in a red 'Formula 1' battery-powered bumper car. Depending on the time of day, SeaPlex also serves as a basketball or volleyball court, roller skating rink, dance party room with a DJ who floats on a platform above the crowd or a circus school with flying trapeze lessons.

'We really expect this to be buzzing all night long,' said Royal Caribbean's Alison Frazier, director of guest entertainment and activities. SeaPlex is 'super-family-friendly,' she added, with activities for youngsters and adults, and programming beginning early in the morning.

A food truck, The Dog House—serving hot dogs—will be tucked in one corner. The upper level of SeaPlex has four activity rooms or SeaPods, for XBox Live gaming, ping pong, foosball and air hockey.

'NorthStar, RipCord, SeaPlex—all of that is free,' Fain noted. The idea is that everybody on board has a chance to ride in North Star and skydive once, then can repeat, if space is available. Activities can be pre-booked on board through the iQ app or kiosk. Premium packages for extras are available for purchase; for example, cruisers may sign up to train for certification at various levels by the International Bodyflight Association.

The Two70° lounge, with its big ocean views, RoboScreen entertainment, super-high-definition projections and aerial acrobats, will have vignettes and shows that Fain touted as 'jaw-dropping exciting.'

When it comes to food and beverage, Quantum of the Seas has 18 dining spots and 14 bars including the Bionic Bar with its pair of robot bartenders. Patrons will order on tablets, then can watch the robot mix their drink.

Seating around 430 people in each, the four main restaurants are designed to be more intimate, said Royal Caribbean's Brian Abel, vp food and beverage operations.

American Icon Grill, with a Route 66 design, comfort foods and regional specialties, will be open for breakfast, lunch and dinner. Other dinner-only options include Silk, serving Asian fusion fare with flavors from China, India, Japan, Thailand and Vietnam, and Chic, which Abel called 'metropolitan, Gotham, a little bit bling,' and serving dishes like pastrami-cured salmon. Since this is the first Royal Caribbean ship without a formal night, diners can dress up for The Grande, an elegant spot with classic fare like lobster thermidor and rack of lamb.

Wonderland will offer the most unusual food aboard Quantum, according to Royal Caribbean's Cornelius Gallagher, director of culinary operations. He cited a chocolate chili foam dessert that's cold-fried in liquid nitrogen and melts in the mouth while giving a touch of heat from the chili—and patrons can exhale smoke from their nostrils like a dragon. Gallagher, who worked at the 'world's best' El Bulli in Spain, was the first US chef to use liquid nitrogen and one of Food & Wine Magazine's 10 Best New Chefs in America.

Royal Caribbean's Windjammer Marketplace will be on Quantum, along with signature specialty venues Chops Grille, Izumi Japanese Cuisine and the Chef's Table.

As with activities, dining can be reserved pre-trip on the Cruise Planner, on board via Royal iQ or at the maitre d's stand. Waiters will use hand-held devices to place orders, giving them more time with diners and the ability to capture guest information such as preferences or food allergies.

'We're really able to personalize F&B through technology,' Abel said. Like other Royal Caribbean ships, Quantum will have electronic displays that indicate the seating availability in each restaurant.

'This tells us people want to plan their vacation,' Lutoff-Perlo said. The ability to do this in advance on Cruise Planner, together with Quantum's smart check-in and RFID luggage tracking, means 'They get the first day of their vacation back.'

With smart check-in, passengers complete documentation online at home, upload their identification photo and save the boarding pass using a mobile app or print it. At the cruise terminal, personnel will have hand-held devices that read the boarding pass bar code and swipe the passport. A green light means go; a red light indicates an error or issue that can be addressed at a check-in counter. Traditional check-in stations will still be available.

Passengers who download an app can track their luggage via an RFID tag that's added when they arrive at the curb.

SeaPass cards will be waiting in an envelope in their stateroom and/or they can use the RFID-tagged WOWband.

'Anything you can do with a keycard, you can do with a wristband,' said Damien O'Connor, director of operations. It's expected cruisers will use the waterproof WOWband by day, especially at the pool, then the keycard by night.

The RFID only operates only in near-field—in this case, one to three inches from the reader—'so we won't be tracking people moving around the ship at this time,' IT director Mark Sinclair said.

Quantum's virtual balconies—in 373 of the ship's 2,090 accommodations—are extremely realistic thanks to real-time exterior images captured by high-definition, 5K cameras. What's on the screen has to perfectly match the movement of the ship so the passenger experiences no motion discomfort, explained Bill Martin, vp and chief information officer.

'The point is to give you a completely realistic representation of what you would see if you could see through the steel. If not, it could make you queasy,' he said. Martin added there are no reports of queasiness due to the virtual balconies on Navigator of the Seas.

The sound and picture of the virtual balcony are controlled with a TV remote and can be turned on or off.

'We have no plans to do other types of programming—like Shrek peeking over the rail—because it takes away from the illusion,' Martin said.

Twenty-eight solo-occupancy studios are on Quantum, 12 with balconies and 16 insides. Some of the suites debut a new split bathroom design, with a full bath and a half configuration. Accommodations have rows of USB and electrical outlets for the increasing number of devices travelers carry.

Quantum of the Seas is 'an amazing experience, even coming from the industry,' summed up Vicky Garcia, chief operating officer of Cruise Planners-American Express.