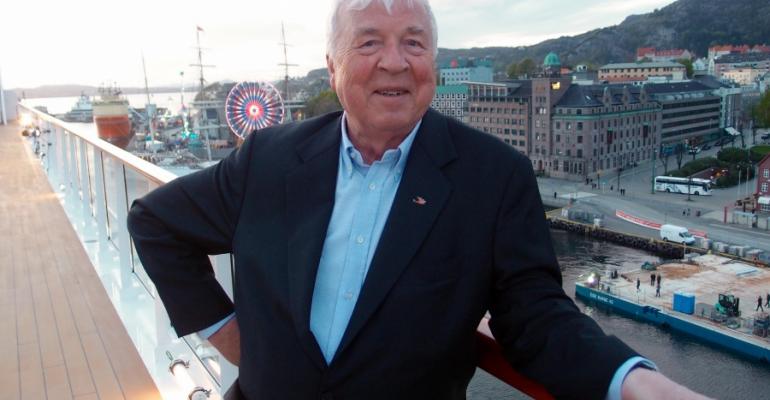 Torstein Hagen on Viking Star's top deck against the backdrop of his favorite city, Bergen

Bergen, Norway, is Viking Cruises chairman Torstein Hagen's favorite city. It's where he got his start in passenger shipping and where he's registering his ocean-going cruise fleet. It's also a homeport for Viking Star, which arrived Friday for a two-day stay.

'I fell in love with it. I had the best years of my life here,' Hagen said on board.

Naming Viking Star in Bergen on May 17, Norwegian Constitution Day, is 'a gift we give to the city,' he added.

Viking, which holds the world record for ships inaugurated in a day, could set another global mark. Bergen Mayor Trude Drevland, Viking Star's godmother, has invited 20,000 people to the festivities. This may be the most ever to attend a ship naming.

Drevland is 'larger than life,' Hagen said. 'She's been very helpful getting us the Norwegian flag on the ships. She's a very, very popular figure.'

All three of the Viking ocean newbuilds will be in the Norwegian International Ship Register, based in Bergen.

The fjord city is where Hagen, 72, was hired to run Bergen Line (Bergenske Dampskibsselskab) when he was 33. Many consider the company's Stella Polaris, built in 1926 in Sweden 'for rich American tourists,' he said, as 'the first custom-built cruise ship in the world.'

Bergen Line became one of three owners of Royal Viking Line, the first contemporary luxury cruise brand, and Hagen later helmed that company for some years in the 1980s.

On Viking Star, in the upper level of the Explorers' Lounge, one of the ship models is of Stella Polaris. It had a yacht-like bow that was translated into the design of Royal Viking Line's first ship, 1972's Royal Viking Star. That bow was further adapted for Viking Star. The ship is 227 meters long—seven meters more than it needed to be, Hagen said—to give a more rakish bow that 'looks nice.'

Hagen, who was born and raised outside Oslo, left Bergen in 1983. But he loves coming back. In the wee hours Friday, he was on the pilot boat to climb aboard Viking Star as it sailed through the Bergen Fjord—a journey he called 'pretty nice.'

Bergen on Sunday morning was thronged with Norwegians in national costume (bunader), waving flags and marching in the Constitution Day parade that snaked around the harbor. Viking Star's funnel, with its distinctive Viking ship logo, was clearly in view.

Noted Norwegian artists are expected to perform at the festivities, which begin with a christening dinner for special guests at the city's main concert venue, Grieg Hall. The ceremony itself will take place against the backdrop of UNESCO World Heritage listed Bryggen, the old wharf area that dates to when Bergen was an important part of the Hanseatic League’s trading empire from the 14th to the mid-16th century.

Guests include Janice Farrar-Titus, whose late husband, Warren Titus, was the founding president of Royal Viking Line and the leader of contemporary luxury cruising. Titus 'had this unique [ability] for knowing what people want,' Hagen said.

'It seems as if we've taken Royal Viking Line from 20 years ago and transformed and modernized it. If Warren had been here, I think he would say "I approve."'

Titus, he added, did not believe in promoting the line as luxury because 'you will always disappoint. You should not be gaudy. You should be subdued,' he said.

'We have brought exploration back to cruising,' Hagen said. 'I don't like a painting with a gaudy frame. This ship and sister vessels are the frame from which you can observe the world in comfort.'

Former Carnival Cruise Lines president and ceo Bob Dickinson will be at Viking Star's naming, too, after cheering Viking Cruises from the sidelines, as Hagen put it. (And Viking has supported one of Dickinson's causes, Camillus House in Miami.)

Manfredi Lefebvre d'Ovidio, chairman of Silversea Cruises, will be on hand. A close friend of Hagen's, he has an a la carte specialty restaurant named after him aboard Viking Star. At Manfredi's, the lasagne recipe was Lefebvre's mother's.

When Viking Star sails to Oslo this week, a visitor will be Knut Kloster, a founder of Norwegian Cruise Line (originally Norwegian Caribbean Lines). 'He almost hired me in 1972 [to run NCL]. I was 29,' Hagen said.

So the Norwegian ties are strong.

Hagen is pleased to have a Norwegian flag on the ship and a Norwegian captain at the helm.

'What we're doing is a great thing for the city of Bergen,' he said, adding: 'Hopefully we'll help bring my favorite city further along.

'I'm very proud of it, a bit emotional.'