Windstar ushers in Star Pride with a Barcelona fiesta 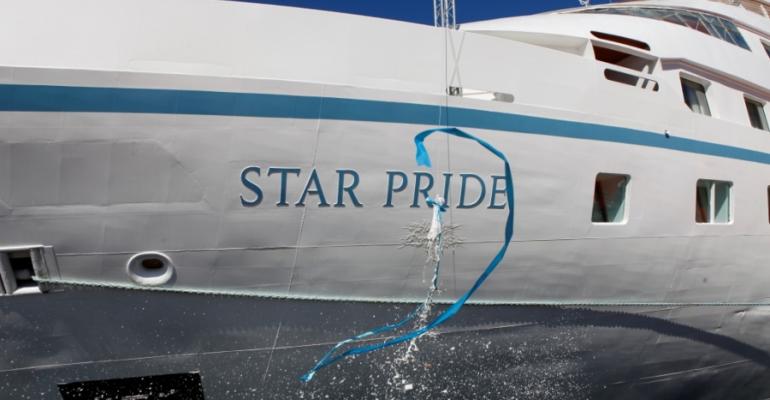 And the bottle breaks

Windstar Cruises' all-suite Star Pride debuted Monday in Barcelona during a christening ceremony and pierside fiesta prior to the inaugural voyage to Spain, France and Italy. The former Seabourn Pride is the first of Seabourn's original three vessels joining Windstar.

Godmother Nancy Anschutz, wife of Philip Anschutz, owner of Xanterra Parks & Resorts, Windstar’s parent company, broke a bottle of Veuve Clicquot on the hull witnessed by past passengers, media and travel agents. She was joined on stage by her husband and Andy Todd, CEO of Xanterra Parks & Resorts; Hans Birkholz, CEO of Windstar Cruises; Capt. Alan MacAry, a 15-year Windstar veteran who serves as master of Star Pride, and Father Marto Rodriguez.

The 200-person gathering was treated to local entertainment including a Catalonian rumba band and street performers from Las Ramblas, as well as Spanish tapas and sangria.

He told Seatrade Insider, 'in a world that is increasingly impersonal, we intend to do the opposite. At Windstar we remain committed to providing an intimate, yacht-style vacation. Our ships will remain small, our ambiance intimate and our service personal.'

The debut followed a three-week transformation at the Port of Barcelona where all public spaces, dining venues and suites were updated in the Windstar style. Alan McVitty and Trimline Interiors, which oversaw the recent $18m renovation of Windstar’s sailing yachts, were instrumental in Star Pride’s refurbishment.

Captain MacAry noted, 'we have been working 36 hour days for the past 18 days to get the job done.'

Following Star Pride’s inaugural voyage, the yacht will spend its summer season in the Mediterranean. In the fall, the ship will embark on Windstar’s new itineraries in Asia and Arabia.

The next two Seabourn vessels will join Windstar in a year. Star Breeze is scheduled to begin its maiden voyage on May 6, from Nice, while Star Legend's inaugural voyage is set for May 25 from Civitavecchia (Rome).