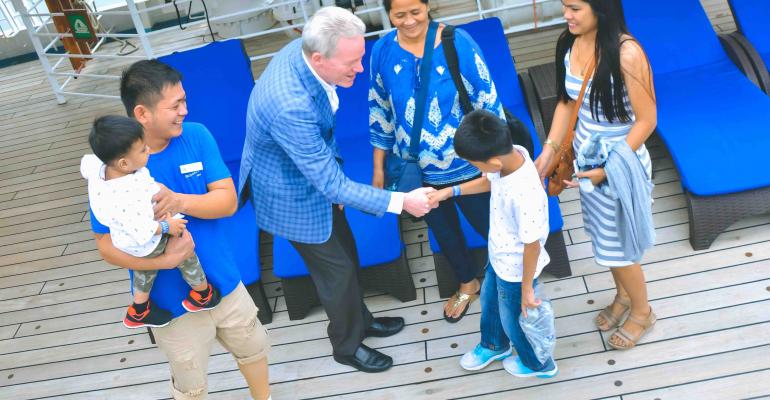 2018 brings more diverse destinations with Windstar's return to Alaska for the first time in more than two decades, its first Canada/New England cruises and new Asia voyages including the first featuring the Philippines. In all, 150 ports have been added.

All this came after Delaney responded to Yacht Club members (Windstar alumni) clamoring for new places to go. He took the Windstar helm in mid-2016, just after Star Pride had re-entered service from an upgrade/repairs following its December 2015 grounding. 2016 was a 'tough year,' Delaney said, when the entire cruise industry was impacted by geopolitical issues in Europe.

People are gravitating to Windstar's new Asia itineraries. The Japan program sold out nine months in advance. The new Canada/New England cruises are popular, especially those that turn in New York, and the season is already 80% booked, months out.

As well, the Alaska program is 'very, very successful. Because it's a new destination—Windstar hasn't been in over 20 years—our Yacht Club members have just jumped all over it,' Delaney said. Offering some longer, 14-day itineraries was 'a little risky,' he acknowledged, however the extra time affords what people want: an in-depth exploration.

'We'll visit the nooks and crannies of the Inside Passage like Grenville Channel and anchor deep up in Misty Fjords National Monument and Kenai Fjords National Park,' Delaney said.

Alaska sees the launch of Signature Expeditions, which feature optional kayak, small boat and small group hikes led by naturalists. There has been 'very strong demand' for those, and Windstar plans to taken them worldwide, where they make sense—places like Iceland, the Norwegian Fjords and parts of Asia.

With the US Coast Guard's recent confirmation that the use of tenders and Zodiacs from foreign-flag ships for excursions violates coastwise trading rules, lines including Windstar will employ third-party boats in Alaska, instead of Zodiacs.

Signature Expeditions are for purchase, however Delaney noted the 212-passenger Star Legend is small enough to give everyone a close-up destination experience even if they don't buy a tour. In Misty Fjords, for example, a park ranger will be aboard to share insights, supplementing the ship's expert expedition team.

Plus, four cruise-tours featuring Denali will be unveiled this week, giving travelers the chance to combine their sailing with a land adventure in programs ranging from 15 to 20 days.

In a very unusual twist, Windstar is going to take Star Legend into Seattle's Lake Union on June 27 to show off the ship to local media, officials and employees. Star Legend is just small enough to fit through the Ballard Locks—and may be the largest passenger vessel to do so. After docking at the Bell Street Pier Cruise Terminal in the morning, it will transit into Lake Union in the afternoon.

On that day Windstar will host an open house for the crew at its Seattle headquarters, and shoreside staff will get a chance to visit Star Legend. (The ship will be deadheading down from Vancouver, BC, and back for this special event.)

On the opposite coast, Windstar's first Canada/New England season—with turns in Boston, New York and Montréal—is also proving 'very, very popular with repeat guests.' Some Yacht Club stalwarts who were with Delaney on the recent President's Cruise are booking two more sailings this year—Canada/New England and Alaska.

The President's Cruise was the first time Windstar went to the Philippines, visiting gorgeous destinations like Boracay, Hundred Islands National Park and Coron in Palawan, and home to nearly half the crew.

When more than 120 family members came aboard the ship in Manila, it 'really touched my heart,' Delaney said. Passengers loved the visit, too, making for 'a magic day.' Windstar also treated the families to a lunch at the Manila Hotel.

Windstar plans to do the same kinds of things when it goes to Indonesia, another home country for many crew, and Delaney hopes to host a future President's Cruise there.

As for the Philippines, he enthused about 'some of the most pristine, beautiful beaches I've ever seen ... Wow! Like out of a movie,' with white sand, clear water and 'beautiful snorkeling.'

His recent President's Cruise also saw the full rollout of Windstar's new 14-day menu cycle under corporate executive chef Graeme Cockburn. This ensures no dishes are repeated, plus regional specialties are incorporated depending on where the ships sail.

And the cruise introduced the full James Beard menu cycle in AmphorA Restaurant—Windstar is the official cruise line of the James Beard Foundation. Delaney called those dishes 'fantastic.'

Concerning the ongoing Caribbean program, destinations 'rebounded quite quickly' after the hurricanes. The line is continuing with its revised San Juan-based itinerary and the round-trip Bridgetown (Barbados) program that replaced the Bridgetown-St. Maarten route through the end of the season in April. Delaney hopes the original itineraries can be reinstated next season.

For now, Windstar is going great guns overall, and a number of announcements are planned in 2018.

'It's a fun time for the brand,' Delaney said. 'We've assembled a pretty remarkable team. The experience is fantastic on board. We're able to be very fast, nimble to make quick decisions. We have a team of really smart people who are creating the best small-ship experience.'