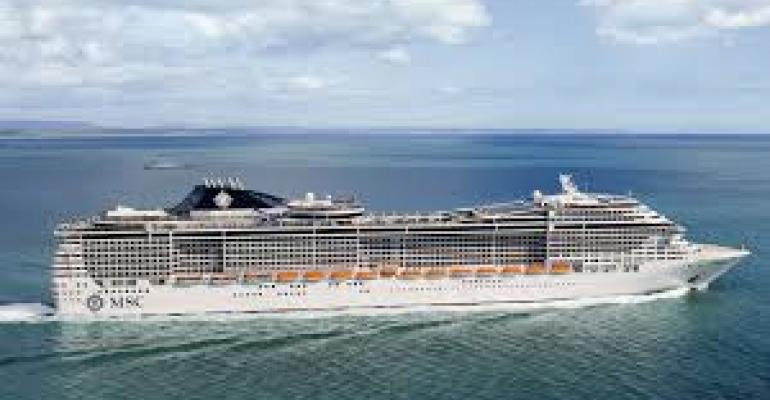 Although none of the mainstream cruise lines are operating during the World Cup in Brazil the chartering of the 4,100-passenger MSC Divina by Mexican tour company Mundomex appears to have been a winning result.

A spokesman for the company told Seatrade Insider the charter has been a great success and provided accommodations for thousands of Mexican supporters 'as well as giving them a great time.’

The MSC Cruises ship arrived in Rio de Janeiro on June 6 from Miami after a 19-night repositioning cruise and has been the home for between 3,500 and 4,100 Mexican passengers since June 7 who have already made calls at Recife (for Natal, where Mexico beat Cameroon 1-0) and Fortaleza (where they drew 0-0 with hosts Brazil).

Today, MSC Divina berthed in Recife ready for Mexico’s next match against Croatia on June 23.

After Monday’s match MSC Divina will sail south back to Rio de Janeiro to disembark one group of Mexicans and embark another. On July 15, the ship is handed back to MSC Cruises to return to Miami.

One snag, when MSC Divina berthed in Fortaleza the port’s new Reais205m cruise terminal was not finished, although it was still able to receive the passengers and crew with various buildings covered by the green, blue and yellow covers of the Brazilian flag.

And the fact it was not completed and ran over budget—eventually costing 37% more than originally envisaged—did not stop commercial director of the Ceara (Fortaleza) Dock Company, Arnaldo Jose Bezerra, from declaring: ‘The new cruise facility will be the new gateway for thousands of extra tourists this year and every year from now on.’

He expects lines like MSC Cruises and Royal Caribbean to bid for the lease of space on the top floor of the terminal, aimed at commercial outlets. ‘Hopefully we can become the home port for several cruise lines in the years to come,’ he said

Brazil Ports Minister Antonio Henrique Silveira was present at the official inauguration of the Fortaleza terminal and he called it ‘a slam dunk for Fortaleza’.

He added, ‘It is a shame that it was not completed but these things happen. It should be 100% complete by September, certainly in time for the next cruise season in Brazil.'

The terminal occupies a total area of 11,000 sq mtr, of which 7,680 sq mtr is of cruise terminal buildings, including a terrace overlooking the Avenue of France and All Saints Bay, with views of São Marcelo Fort.

The country’s former ports minister, Leonidas Cristino, who is from Fortaleza, said: ‘This terminal is a very modern one, unlike the cruise facilities in Santos and Rio de Janeiro, so we can now expect many more cruise calls in the future.’