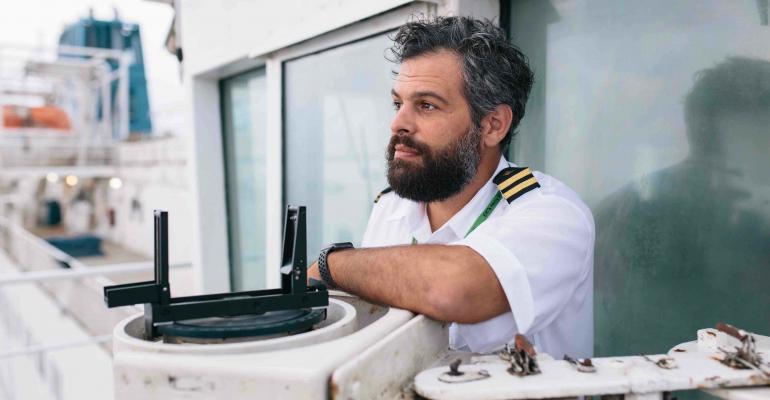 'Serving on board Mercy Ships gives you the opportunity to be the best version of yourself,' second officer Eric Baliantz said
San Francisco native Eric Baliantz has been a seafarer since he was 19, working all over the world on many types of ships—car carriers, container vessels, bulkers, general cargo tramp ships, an anti-piracy patrol ship in the Mozambique Channel and scientific research vessels.

But his favorite job is one that doesn't pay—yet it's the most rewarding.

Baliantz, 41, is serving a six-month stint as second officer aboard the hospital ship Africa Mercy, which provides free, life-changing surgeries to some of the world's neediest people.

'I just love it,' he said by phone from Guinea. It's his third time volunteering for Mercy Ships, for which he's also worked in Cameroon, Benin and Madagascar.

'I find the work that I do on Mercy Ships deeply rewarding in a way that I don't really find on commercial vessels often, if ever. I don't often have the opportunity to be of service in the way that I am on Mercy Ships,' Baliantz explained.

'I love the work that I do on commercial vessels but serving on board Mercy Ships gives you the opportunity to be the best version of yourself. I feel like I'm doing the right thing ... I make these really long-term friendships and there's an atmosphere of joy on Africa Mercy that I miss when I leave, and I look forward to coming back.'

Baliantz described the medical work aboard as a 'miracle.' Surgeons heal 'the poorest of the poor, the forgotten poor,' people with afflictions like giant tumors, disfiguring burns, clubfoot, obstetric fistula and blindness from cataracts. 'No one else would think about them, and they certainly don't have access to healthcare. Mercy Ships honors them by taking care of them, and the surgeries change their lives,' he said.

'I'm not a surgeon but I do feel I'm part of something that's really good and being a deck officer on board is a way I can use the skills I have to help people.'

Everyone on Africa Mercy is a volunteer—from the captain to the motormen, the surgeons to the galley staff. The more than 400 volunteers come from over 40 nations.

Baliantz counts the 'great community of people' on board as another reason he loves to serve.

He's had some great adventures with fellow volunteers. The work is not in shifts like on a regular ship, but consists of eight-hour days, five days a week. People can take off for weekends and holidays.

Last weekend a small group ventured to Îles de Los, the islands of the Idols, in a dugout canoe with an outboard engine. One of the islands is said to have inspired Robert Louis Stevenson's 'Treasure Island.' There, they hiked through the jungle to a small freshwater lake to swim and eat lunch.

'We talked about our different jobs on board and the patients we were helping and where we're from and about our lives when we weren't on the ship,' Baliantz related. 'We didn't know each other very well at the start of the trip but now we're all friends. I love being a professional mariner, but volunteering on Mercy Ships is different. It is what I hoped going to sea would be like before I actually went to sea on commercial ships.'

Another adventure was climbing Mount Cameroon, the highest point in sub-Saharan western and central Africa.

According to Baliantz, volunteers experience a special connection with one another. He recounted one period at a shipyard when Africa Mercy was having problems with potable water. This took a couple days to resolve and, in the meantime, hundreds of three-liter water bottles were trucked in.

The public address system would call for all hands to help load the bottles. 'I've never seen so much water get loaded so fast!' Baliantz marveled, describing a chain of doctors, engineers, nurses and deckhands passing bottles up the gangway, laughing all the while.

'Even something as mundane as carrying water can become this unforgettable moment,' he said. 'There are a lot of moments like that on board.'

Time with the patients

Spending time with the patients is particularly gratifying. When language is a barrier, Baliantz may play Jenga with the kids, or people simply communicate with their hands, learn each others' names and hold up fingers to describe how many brothers and sisters they have.

'Other times I'll just go [to the hospital] and sit with them, quietly watching a soccer game together. The little kids will often want to hold your hand. Small interactions like this remind me why I'm here.'

Baliantz will be going for his unlimited chief officer's license later this year, and he's getting sea time toward that while aboard Africa Mercy.

'It is a tough sell to ask someone who works in our industry to leave a well-paying job or take their vacation to pay to volunteer—we pay nominal crew fees to help cover room and board,' Baliantz explained. 'But the "cost" of serving does not begin to compare with the personally gained benefits of volunteering with Mercy Ships,' he added.

'We gain life-long friendships, the unique experiences of seeing patients’ lives transformed, the camaraderie shared by all crew, from surgeons to nurses to deck hands, living and working in a family-oriented atmosphere with school-aged children on board. Most mariners who come during a work break are personally impacted and cannot wait to return.'

Information: www.mercyships.org or a Facebook page devoted to deck and engineering personnel.