For world's largest cruise ship, 10 minutes from curb to gangway in Southampton 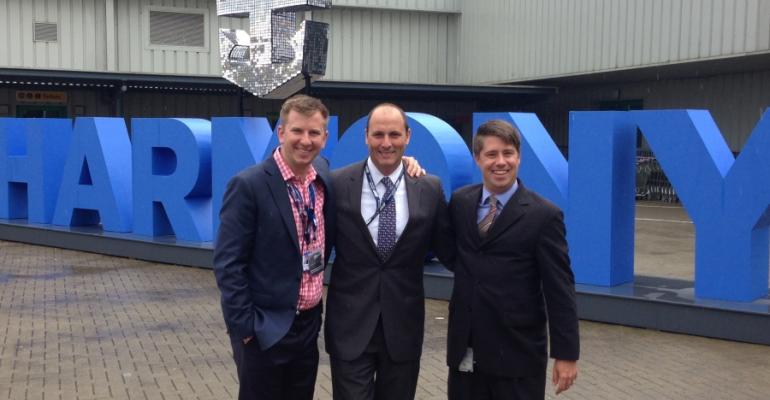 The world's largest cruise ship completed its first turn around on Sunday at Southampton, and Royal Caribbean's port operations team is pleased with how things went. Harmony of the Seas embarked 4,700 revenue passengers for a four-night round-trip to Rotterdam after a two-nght preview sailing that carried 3,500 travel agents and media.

'It's the first time we've put the next-generation tablet embarkation on an Oasis-class ship,' said Adam Sharp, head of port operations & guest services, Europe, Middle East & Africa, Royal Caribbean Cruises Ltd. Until now, the system has been used for vessels up to Quantum-class size. The goal remains 10 minutes from curb to gangway, and Sharp said that's being achieved.

A quarter of a million pounds went into upgrading Southampton's City Cruise Terminal for Harmony of the Seas, including a bespoke gangway in conjunction with Associated British Ports, owner and operator of Southampton port. Additional passenger handling areas were created, too.

For Sharp's boss, Mike Jones, it was the first major new turnaround operation he's led since taking on additional responsibility for port operations in February. Previously the chief of supply chain management, Jones now oversees both areas and has a new title: strategic operations officer.

Already he has applied aspects of the logistics and supply chain disciplines into enhancing port operations, Sharp said.

Come Tuesday, when Harmony calls at Rotterdam, some 75 distinguished guests led by the mayor and Mai Elmar, md of Cruise Port Rotterdam, will come aboard for a plaque exchange and lunch.

Meanwhile, media coverage of Harmony of the Seas in the UK has been 'phenomenal,' Sharp said.

Plus, thousands of onlookers have flocked to the waterfront to gaze at the ship, whose funnel rises above the cityscape. Sharp said local vendors are benefiting by supplying such items as fresh flowers and marquees. He's proud, too, that his own family from Southampton have been able to see Harmony.

'If someone said to me 10 years ago you'd be handling the world's largest cruise ship, bringing it into your own garden, your own backyard, I'd never have believed it,' Sharp marveled.