Yokohama on track to open two new cruise terminals in 2019 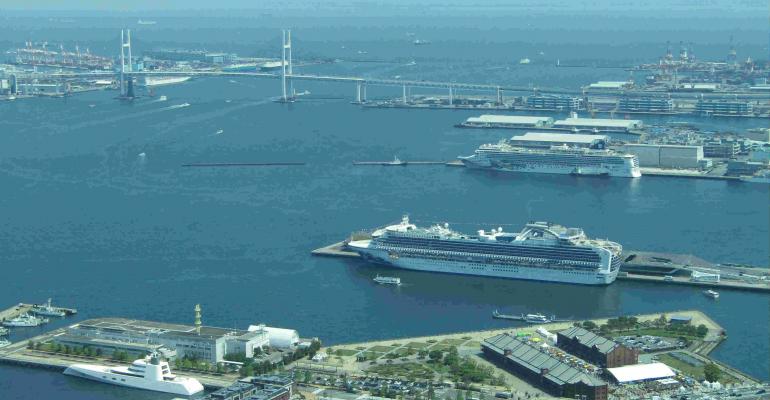 Princess Diamond (centre), Norwegian Joy (top) and MSC Splendida - berthed at Daikoku Terminal - (top left under bridge). The crane in the bottom left of photo is working on Shinko Pier Cruise Terminal.
Yokohama is gearing up for increased calls and accommodating bigger cruise ships with two new cruise terminals due to be fully operational in 2019.

Last year the Japanese port, 20 minutes away from Tokyo’s Haneda airport, welcomed 178 cruise calls and a similar number is expected this year.

In 2019, Princess returns for a sixth season with round-trips from Yokohama.

To better handle the increase in cruise traffic the new Daikoku Cruise Terminal will become operational from April 2019. It has a berth length of 440mtr and depth of 10 to 11mtr, capable of accommodating any cruise vessel of up to 220,000gt.

It has already been temporarily in use for cruise ship handling when MSC Splendida made a maiden call April 27, a day Yokohama had a record three cruise vessels in port, including a second call by Norwegian Jewel and a Diamond Princess turnaround.

A second new cruise facility, Shinko Pier Cruise Terminal with a length of 340mtr and depth of 9.5mtr, will be able to handle vessels of up to 110,000gt.

This is close to where Princess Diamond currently docks.

Shinko Cruise Terminal is expected to open in 2019.

Noodles and gardens - popular with visitors

According to Megumi Nemoto of Yokohama Convention & Visitors Bureau Sales Promotion Dept, popular tourists attractions in the city include the interactive Cup Noodles Museum, which details the history of instant noodles and life story of Momofuku Ando, the inventor of instant ramen, that revolutionized eating customs the world over. Another highlight is Sankeien, a Japanese-style garden designed and landscaped by Tomitaro Hara, a wealthy businessman who was directly linked to Yokohama’s maritime history and the silk trade. The 17,500sq mtr Sankeien garden includes 17 historical buildings, some brought in from Kyoto.