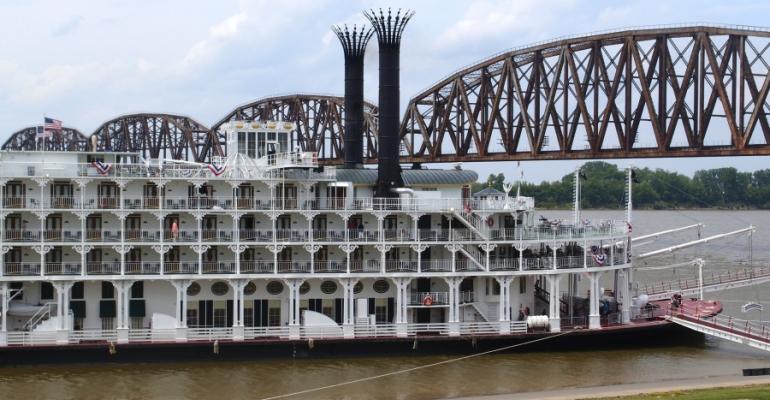 American Queen is underway after having one its Z-drives replaced in Maysville, Ky., and the paddlewheel removed and disassembled to repair the main shaft, which developed a stress fracture.

The vessel is due to reach Pittsburgh Thursday on a revised itinerary that will not offer shore excursions, according to American Queen Steamboat Co. president and COO Ted Sykes.

After Pittsburgh, American Queen will resume its scheduled program under the power of Z-drives, and the paddlewheel will be reassembled once repairs have been made.

'All modifications on the American Queen have been approved by the Coast Guard for her to continue sailing,' Sykes said.

The paddlewheeler had been alongside in Maysville, a small town on the Ohio River southeast of Cincinnati, since Sunday afternoon. It sailed on Tuesday morning.

The 215 passengers remained on board during the layover.

They will receive the choice of a free cruise on the July 4 voyage from Pittsburgh, returning to Cincinnati July 9, or 25% off their current fare for a future sailing.

The 436-passenger American Queen is the largest paddlewheel steamboat ever built. Constructed in 1995, it was brought back into service by the start-up American Queen Steamboat Co. in 2012. The Memphis-based operator recently introduced its second vessel, American Empress, in the Pacific Northwest.