9/11 didn't end travel but fundamentally changed it. COVID-19 will, too: Fain 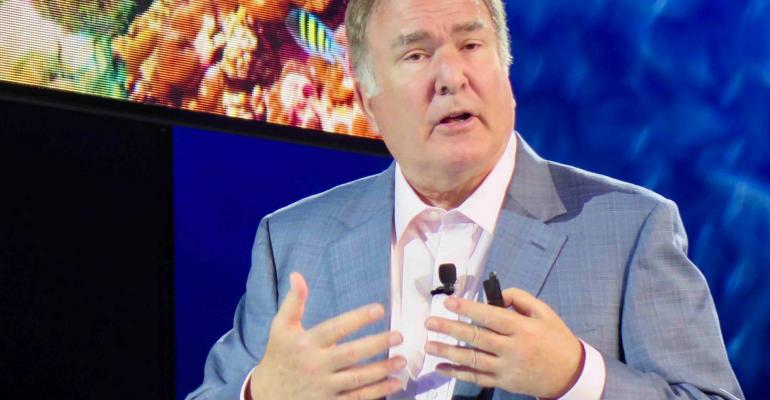 Cruising will come back strong 'not by mimicking what we used to do but by innovating our product to meet the exciting demands of the world as it is,' Richard Fain said

Richard Fain put the COVID-19 situation in context by reflecting on 9/11, with an added prescient twist.

It's not just that travel resumed and gradually ballooned. People forget how much travel also changed.

'Travel didn't simply revert to what it had been. Rather, travel adjusted to the new normal, and it grew on that basis,' the Royal Caribbean chairman and CEO said on Wednesday's earnings call.

He believes the same will happen in a post-COVID-19 world: 'Travel and tourism will grow, not by reverting to what it was, but by adjusting to a world where all activities, everything we do in the world, will have changed.'

By this Fain signaled new practices that likely will be lasting — just as security screening at airports and ships changed forever after 9/11. He didn't go into details, but those who think the changes that are coming will be short-lived may find his remarks sobering.

That's not to say he was being negative, on the contrary.

Fain said cruising is resilient and will come back strong, 'not by mimicking what we used to do but by innovating our product to meet the exciting demands of the world as it is.'

To that end, Royal Caribbean's Healthy Return to Service Program has four main focuses: upgraded screening prior to boarding, advanced processes and procedures on board, a special focus on the destinations and procedures for dealing with any reports of exceptions.

All of this is extremely complex, so the company has assembled a 'blue ribbon team of experts' to advise on the right approach.

'Our goal is to raise our standards to entirely new levels ... We have the time, we have the determination, and we have the expertise,' Fain said. He added that beyond making ships safer, the cruise industry needs to restore confidence by being transparent and by communicating.

'We will not start operations until we are fully ready to do so,' Fain told analysts, 'with all the hygiene and other health protocols solidly in place.'

Service probably will restart outside the US

So far an astonishing 621 company voyages have been canceled.

Whenever operations resume, they are likely to be gradual, just as society is gradually opening, and markets will come back at a varied paces, based on the virus curve, Royal Caribbean management said. Drive markets will likely be among the first.

'It is a very different story by region and by country,' according to Michael Bayley, president and CEO, Royal Caribbean International. 'I think it's highly likely either the Asian markets, China for example, or the European region could come back earlier, because they went through this experience earlier, and that's particularly true of China.'

He's been talking with more than 40 ports around the world and said it's surprising how many want the business back. Yet it's a mixed picture, 'with every region, every country on their own journey.'

Overall, Royal Caribbean sees 'strong volumes for 2021' with rates up single digits compared to 2020 and slightly below the average rates of the past three to five years, CFO Jason Liberty said. About 45% of people seek refunds with the rest choosing 125% future cruise credits.

Of the FCCs out there, about 20% have been applied. This means most bookings are new cash.

FCCs skew to Royal Caribbean loyalty members — there are nearly 21m of those. Families and baby boomers are also likely to take the FCC, and use it.

To break even on an EBITDA basis, about a 30% load is needed for newer ships and 50% for older ships, according to Liberty. Newer ships have better economies of scale, greater fuel efficiency and a richer cabin mix.

Given what's been done to right-size costs and minimize capital expenditures, 'As we return to service, we certainly do not need the entire fleet operating at full levels to break even, and you don't need load factors to be exceptionally high,' Liberty told analysts on the call. 'A slow return to service gets us back to a break-even EBITDA in a relatively short period of time.'

It's likely the first ships to sail will be the bigger, newer ones, and those the company has invested to modernize.

Liberty predicted the cruise industry will retire ships at a much higher rate as a combination of COVID and IMO 2020 sulfur regulations.

'The newbuilding programs for us and probably for the industry will slow,' he added, because shipyards and supply chains have been impacted. Liberty sees a shift in capacity growth rates for some time to come — not a shift and catch up, he stressed, but a permanent shift.

How much could the $150m to $175m in monthly ship operating costs come down when the full fleet is laid up?

Liberty didn't specify but said there's opportunity. Monthly cost per ship in cold layup is typically $1m to $1.5m, versus $2m to $2.5m for warm layup.