AmaWaterways to introduce Nile vessel in 2021 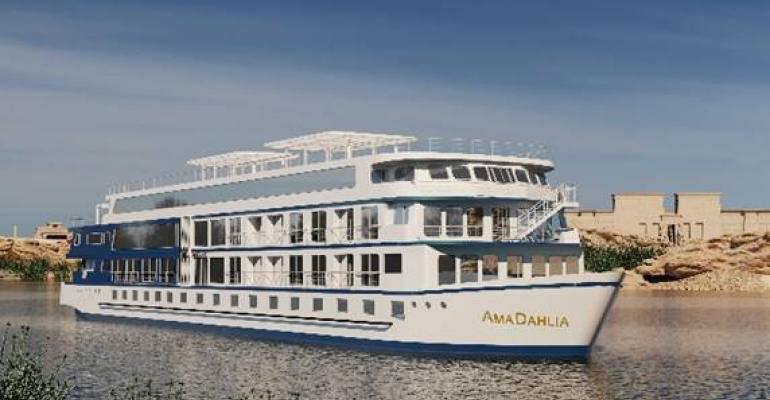 The 68-passenger AmaDahlia will feature 34 luxurious accommodations, including 24 balcony suites measuring up to 430 square feet

AmaWaterways plans to introduce its 25th river vessel, AmaDahlia, on the Nile starting in September 2021.

Four Seasons stays before and after in Cairo

AmaDahlia will operate an 11-night 'Secrets of Egypt & Nile' cruise and land adventure. Included are a seven-night round-trip cruise from Luxor paired with three nights pre-cruise and one night post-cruise in Cairo at the five-star Four Seasons, Cairo at The First Residence.

President and Co-founder Rudi Schreiner said AmaWaterways is pleased to return to the Nile with 'luxurious accommodations, delectable cuisine and enriching experiences designed to engage with local communities and historic sites.'

Passengers will follow expert guides to legendary locations like the Great Hypostyle Hall of Karnak, the Temple of Luxor and the Valley of the Kings and Queens. They will get private access to the Tomb of Queen Nefertari and a Nubian village. While in Cairo, they'll visit the Great Sphinx and three Pyramids of Giza and the Egyptian Museum, and have a private tour of the principal workplace of Egypt's president, the Abdeen Presidential Palace, considered one of the most luxurious palaces in the world.

The 68-passenger AmaDahlia will feature 34 luxurious accommodations, including 24 balcony suites measuring up to 430 square feet. Amenities include a sun deck and swimming pool, fitness room, hair and nail salon, two massage rooms and two restaurants. Nightly entertainment will include a belly dance show, a Galabeya (a traditional Egyptian gown) party and a Darawish show.

The program, with intra-Egypt flights between Cairo and Luxor, will operate from September to May each year. Optional extensions include three nights in Dubai or four nights in Jordan (Amman and Petra) before and four nights in Israel (Jerusalem) after.

Bookings by June 30, 2020, offer early booking rewards that may be combined with Past Guest Privilege Rewards.