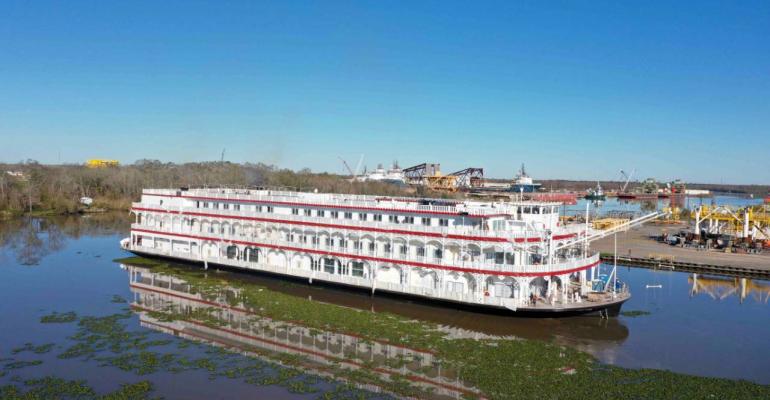 American Countess went through tests on the Intracoastal waterway near Gulf Island Shipyard in Houma, Louisiana

The paddlewheeler is scheduled to be christened April 4 in New Orleans ahead of its inaugural sailing from there to Memphis April 5-13.

Joins American Queen and American Duchess in the heartland

The 245-passenger boat will join American Queen and American Duchess on the Mississippi, Tennessee, Ohio and Cumberland rivers. (American Empress operates in the Pacific Northwest.)

On Wednesday this week American Countess navigated through a section of Louisiana's Intracoastal waterway from Houma en route to Morgan City as part of an extensive river trial. The vessel completed several tests and simulations toward a certificate of inspection from the US Coast Guard. Several USCG officials were on board.

On track for on-time delivery

The completion of this trial puts American Countess on track for an on-time delivery from Gulf Island Shipyard.

The riverboat is scheduled to transit to New Orleans in late February, spending four weeks receiving finishing touches at the port. Crew members will join to help in the final preparations and undergo safety and service training prior to a March 31 VIP preview cruise culminating in the christening April 4.

‘The successful completion of these sea trials is a testament to the hard work of our team,’ said John Waggoner, founder and CEO of American Queen Steamboat Co.

‘A tremendous amount of time and effort by our team members, in addition to those from the shipyard in Houma and all of our partners, has gone into making this last sea trial a triumph,’ added David Kelly, executive vice president of American Queen Steamboat Co.

With four decks, including a sun deck, the vessel sports a contemporary interior design with plenty of open space for gatherings. The 120-foot-long portside bar provides floor to ceiling glass for panoramic river views. The 123 accommodations are divided into four categories.

The maiden voyage, an ‘Antebellum South’ itinerary, showcases the Lower Mississippi on an eight-day itinerary that stops at AQSC’s exclusive port at Nottoway Plantation and continues up the river to St. Francisville, Natchez, Vicksburg, Port of the Mississippi Delta and Memphis.