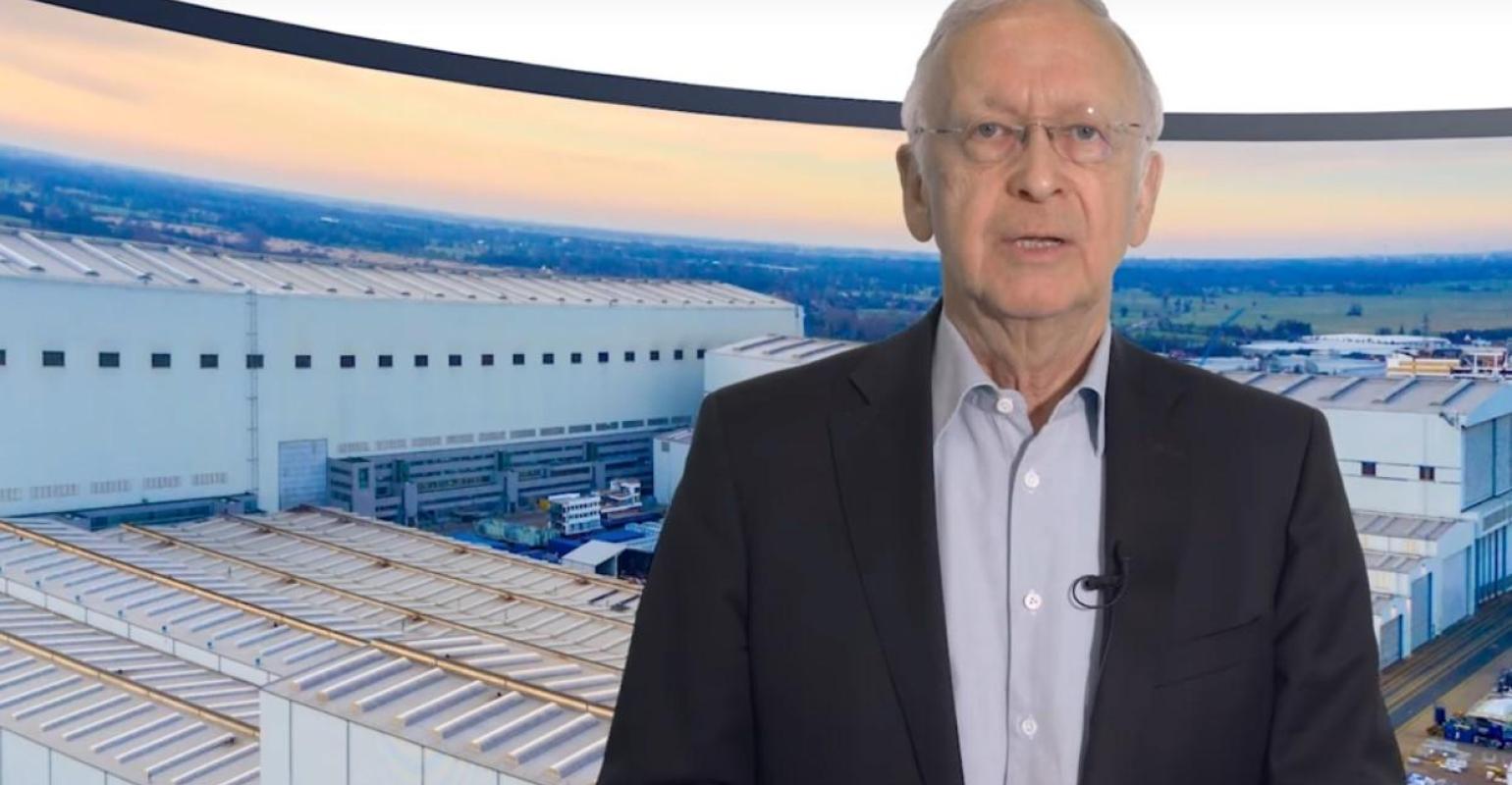 Bernard Meyer, pictured here addressing shipyard workers on Wednesday, thinks it will be 2030 before the cruise market can equal that of 2019
Meyer Werft is renegotiating cruise orders to avoid cancellations, expects newbuild business won't resume for several years and will cut capacity to keep afloat.

Shipyard owner Bernard Meyer and other management outlined the grim realities in an address to workers, with Meyer adding his assurance that the privately held business will adapt to survive this crisis just as it has met others during its 225-year history.

However, Meyer called the current coronavirus crisis 'completely different' from challenges like the 1973 oil crisis, 9/11 and the 2008/09 financial crisis.

'Never before has the complete cruise fleet with over 400 ships stopped operating,' he said. Meyer predicts recovery is a long way off — he thinks it will be 2030 before the cruise shipbuilding market equals that of last year.

The Papenburg yard has orders until 2023 and the Meyer Turku until 2024. One customer told Meyer it wouldn't need new ships at all but would be happy just to be able to run its current fleet again. Talks are going on to find solutions that are 'bearable for both parties,' with Meyer Werft considering stretching its existing orderbook to avoid cancellations.

Fewer new ships will be needed and built, requiring reductions in all parts and companies of the group, including a smaller workforce.

Citing market observers, Meyer Werft MD Thomas Weigend said only 50 percent to 75 percent of the global cruise fleet would resume operations by year's end, resulting in massive losses for the cruise lines in 2020. If everything goes well, that would be followed by break-even results in 2021 and profits not returning until 2022.

Cheap second-hand tonnage could factor in

And, in case one or more cruise lines fail, their tonnage would come onto the market as cheap second-hand ships, potentially disrupting the newbuild scenario for much longer, he added.

All cruise-specialized shipyards will have massive overcapacity, Weigend said, and with 70% of the yard capacity for cruise shipbuilding state-owned, it will be a huge challenge for Meyer as a private enterprise to compete.

Group capacity output to be cut 40%

In a best-case scenario, the annual capacity of the Papenburg yard will be reduced from two big cruise ships and one smaller ship per year to only one large and one smaller vessel.

Also, Weigend said that by stretching the existing orderbook at all Meyer Group sites, output will be reduced 40%.

It has already been decided to significantly reduce investments, stop recruiting and stop awarding contracts. Talks about short-term work are under way with the Works Council. As immediate measures, Meyer Werft is cutting overtime and weekend work. Contract staff are being reduced.

'I am sure we will make it'

It will be necessary to adapt to the new situation, Bernard Meyer told workers. 'We need to have a lot of new ideas,' he said. 'This is the chance for a private shipyard over the state-owned shipyards.'

Throughout his address, Meyer cited earlier crises, particularly the 1973 oil crisis, which triggered a tanker market crisis and structural crisis for Germany's shipbuilding industry. 'We needed 20 years to return to where we had been in 1973,' he said.

As for the current situation, despite the grim perspectives and drastic measures announced, Meyer told workers: 'I am sure we will make it.'