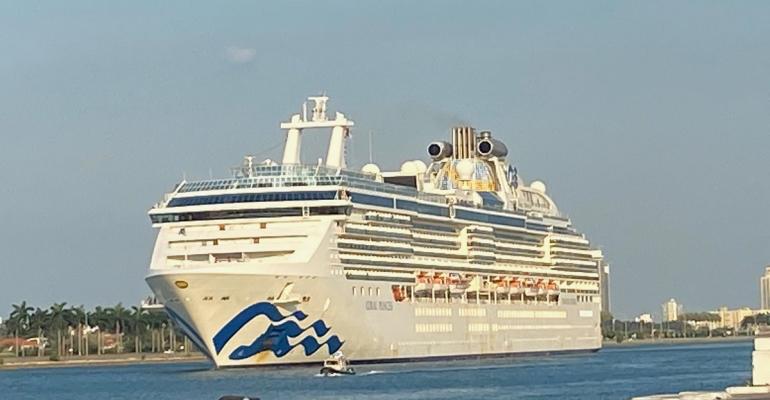 Coral Princess sailed from PortMiami Thursday afternoon, carrying 13 international passengers who will stay aboard with crew for a 14-day quarantine. Princess Cruises said current travel restrictions in home countries prevented the repatriation of those passengers and local authorities would not authorize the use of hotels.

Five charter flights were scheduled to depart Thursday: one domestic and four to South America and Europe.

According to Princess, additional crew joined the ship to aid the 'self-imposed' quarantine, to monitor symptoms to reduce the possibility of transmission if people were to become symptomatic.

NSW Police detectives conducted inquiries aboard Ruby Princess and took its voyage data recorder as part of a criminal investigation into how the ship was allowed to disembark almost 2,700 passengers in Sydney on March 19 before tests revealed some had COVID-19.

Aurora Expeditions announced the cost of the specially equipped chartered flight scheduled to fly Australians and New Zealanders to Melbourne from Montevideo on Saturday will be covered by its insurance. There will be no charge to passengers.

Earlier it was reported that the cost of flying the Airbus A340 from Portugal to Uruguay, on to Australia and then back to Europe with two flight crews, plus the extensive cleaning of the aircraft, would be around A$15,000 per person.

Also, New Zealanders will no longer be required to quarantine in Australia. The New Zealand government is arranging to fly them directly back to New Zealand when the Airbus A340 touches down in Melbourne.

Celestyal Cruises extended its suspension of operations from May 1 until June 29. On that date it plans to resume sailings with the 'Iconic Aegean' four-night itinerary round-trip Piraeus.

The line is offering a 120% future cruise credit or a full refund for canceled cruises. Travelers will have until the end of December 2021 to apply their credit to any sailing through 2022. Anyone who hasn't done so by then will automatically get a refund.

Celestyal also extended its 'Peace of Mind' policy until Dec. 31, allowing changes up to seven days before departure for trips between June 29 and Aug. 31 and up to 30 days before travel for departures from Sept. 1 to the end of December.

The Grenada Tourism Authority is participating in the #CaribbeanDreaming campaign. #GrenadaDreaming shares evocative images of the destination to inspire people to visit in the future — to ‘dream today and travel tomorrow.'

The #GrenadaDreaming video is here.