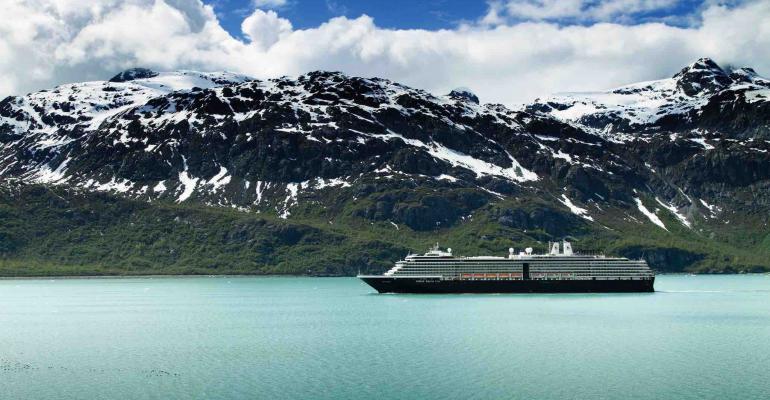 Further Alaska cancellations include all sailings for summer 2020 on Maasdam, Noordam, Oosterdam, Volendam and Westerdam and all Land+Sea Journeys that combine a cruise with an overland tour to Denali and the Yukon. The McKinley Chalet Resort, McKinley Explorer rail cars and tour motor coaches will not operate.

This is a first in the company's more than 70 years of taking guests to Alaska, HAL President Orlando Ashford said.

Passengers on canceled cruises can get a full refund or choose a 125% future cruise credit plus an on-board credit of $250 per person to be applied toward any sailing through 2021. Travelers must select the refund or FCC by June 1, 2020. The FCC must be applied by the end of 2020.

Travel advisor commissions are protected on bookings for canceled cruises that were paid in full and for the total amount of the FCC when clients rebook.

Princess cancels all sailings through June and Alaska Gulf cruises

Likewise, Princess Cruises canceled all voyages through June 30, along with Alaska Gulf cruises and cruise-tours. The five wilderness lodges, trains and buses operated by Princess in Alaska will not open this summer.

The line will continue round-trip sailings from Seattle to Alaska on Emerald Princess and Ruby Princess.

'We recognize how disappointing this is to our long-term business partners and thousands of employees, many of whom have been with us in Alaska for decades,' Princess President Jan Swartz said.

Each ship will have a unique return to service date, with some modifications, departing after July 1. Details, including for select Australia homeport voyages, are spelled out here.

Passengers booked on canceled sailings who have paid in full will receive a 125% future cruise credit to be used on a sailing by May 1, 2022. No action is required to receive this offer and customers will be notified by e-mail once the credits have been issued. Alternatively, a full refund is available via an online request form that must be received by May 31, 2020, or the FCC will be given.

Princess is protecting commissions on bookings for canceled cruises that were paid in full.

Norwegian Sun not going to Alaska after all

Norwegian Cruise Line had planned a fourth ship in Alaska this season but will not be sending Norwegian Sun after all. Instead, the vessel will be based from Port Canaveral for a mix of three- to five-day Bahamas/Florida and Western Caribbean itineraries once the temporary sailing suspension is over.

Seabourn paused operations through June, from May 14 previously. For canceled sailings, a full refund or 125% future cruise credit are offered.

The remaining passengers aboard Greg Mortimer, including six US citizens, will return to the United States on a medical evacuation flight organized by charterer Aurora Expeditions.

All will transit through Miami before traveling onward to their home countries on medical evacuation flights. The US Embassy in Montevideo worked extensively with several US government agencies to gain approval for the flight and for citizens of other countries to transit through the United States.

They will transfer from Greg Mortimer at the Port of Montevideo to Carrasco International Airport via a sanitary corridor the government of Uruguay implemented to allow for safe travel of cruise passengers who have been exposed to COVID-19.

Patient zero likely to have been in Ruby’s galley

NSW Police Commissioner Mick Fuller believes the source of the deadly coronavirus outbreak on board Princess Cruises’ Ruby Princess was a crew member who handled food.

Fuller said it was probably someone working in the galley.

‘It would seem the most obvious point of transmission is someone who is handling food on behalf of multiple hundreds of people,’ he said.

The criminal investigation led by NSW homicide detectives to determine why Ruby Princess was allowed to dock in Sydney and disembark around 2,700 passengers on March 19 before tests revealed some were ill with COVID-19 could take months.

More than 700 cases of coronavirus and 18 deaths have now been linked to the ship which was still docked in Port Kembla on Tuesday.

Thirteen tons of food and beverages were delivered by Pullmantur Cruises to Málaga City Council and the government of Colón Province, Panama, where two of its ships are currently berthed.

Cold meats and sausages, canned fish, olive oil, coffee and dairy products are among the items that were distributed to shelters, soup kitchens, homes and associations, providing enough sustenance for around 1,800 people.

The food, from Monarch and Sovereign, was donated to help families facing difficult situations, Pullmantur President & CEO Richard J. Vogel. said. ‘We will continue to analyse any possible opportunities to make new food donations,' he added.

Monarch and Sovereign have been docked at Colón and Málaga since March 13 and March 20, respectively, and are not expected to resume cruising until May 30.

Cruise & Maritime Voyages’ Columbus arrived in London Tilbury Tuesday morning at the end of a month-long repatriation voyage to the UK which sailed from Phuket, Thailand, March 18.

Columbus made the 7,842-nautical-mile repatriation voyage with 907 passengers including 602 British nationals and 619 crew. The voyage included a technical call at Colombo, Sri Lanka, and transited the Suez Canal. Five passengers were repatriated via tender to Malta and Gibraltar before Columbus arrived at Tilbury.

Earlier, CMV had carried out a passenger transfer operation off the coast of Phuket that took British nationals from its Vasco da Gama to Columbus, while Australians went from Columbus to Vasco da Gama to be taken Fremantle.

Vasco da Gama, CMV’s only remaining ship still sailing, is en route to London Tilbury with no passengers on board, due to arrive April 30.

CMV said it has recorded no COVID-19 coronavirus cases among passengers or crew on any of its six ships.