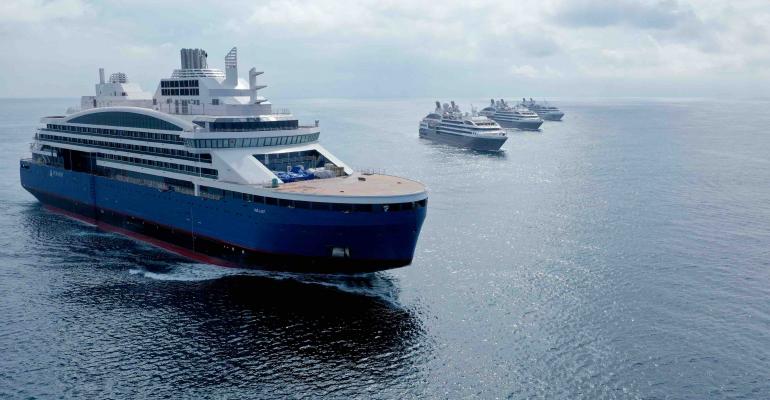 Newbuild Le Commandant Charcot, foreground, rendezvoused in the Gibraltar Strait with Ponant's L'Austral, Le Boréal and Le Lyrial. The polar expedition vessel was en route to Vard Søvik in Norway from Romania, and the other ships were heading to Marseille

The Royal Caribbean Cruises Ltd. group extended the suspension of its sailings through June 11.

The CoronaSafe finger prick antibody test has been introduced by Martek in response to EU and IMO guidelines, which require ship operators to screen seafarers for coronavirus prior to boarding.

Currently used by authorities in Japan, China, Germany, Poland, Indonesia, Philippines and Singapore, CoronaSafe takes 10 minutes to deliver results and is particularly useful for identifying asymptomatic crew members, according to the company, which is part of James Fisher & Sons plc.

Martek has a limited number of tests and urged shipowners to act quickly to define their own crew screening policies.

Ponant brings part of its fleet home to France

Ponant, which earlier repatriated all of its 1,600 passengers from around the world, welcomed back this morning three of its ships to Marseille, where the French luxury company is based.

L’Austral and Le Boréal came from Rio de Janeiro, which they left March 24 and March 29, respectively. Le Lyrial had sailed from Cape Town on March 18. All three ships are docked in the Grand Port Maritime until sailings resume. From May 11, the first two ships are to undergo technical work, initially planned for this winter.

Le Champlain and Le Dumont d'Urville are still en route from the Caribbean and will wait out the suspension of service at Saint-Malo, Brittany.

'We decided to take these ships to France to better facilitate our re-entry into the business,' said Ponant's Hervé Bellaiche, chief sales and marketing officer.

Since March 13, Le Láperouse has been off the coast of New Caledonia. Le Soléal and Paul Gauguin (of sister brand Paul Gauguin Cruises) are on standby at Papeete, Tahiti and Le Bougainville is in the Seychelles.

Medical services to be enhanced

Ponant plans to enhance the medical services on board in partnership with Marseille's IHU (University Affiliated Hospital), headed by Professor Didier Raoult, continuing a relationship that has been in place for three years.

Other ships and newbuilds

Le Bellot, delivered March 12, and Le Jacques Cartier are at Vard's Søvik shipyard in Norway. They will soon be joined by polar expedition newbuild Le Commandant Charcot, which left the Vard yard in Tulcea, Romania, on March 19 and will continue its outfitting in Søvik. As for the company's first ship, Le Ponant (1990), it is at the San Giogio del Porto yards in Genoa.