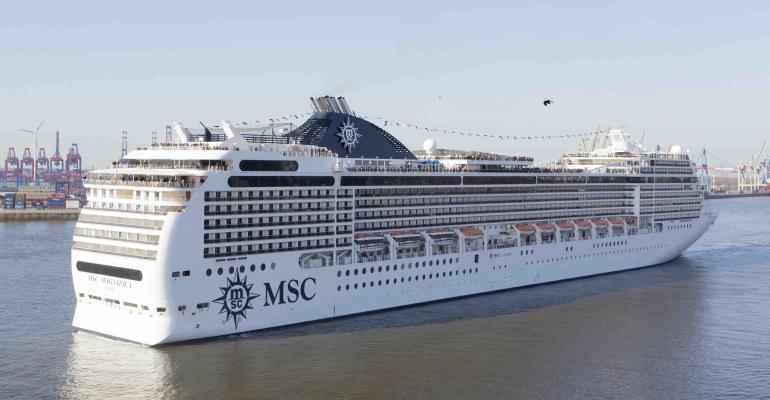 Until MSC Magnifica arrived at Marseille Monday, no one had been on or off the ship in 35 days

More than 1,500 passengers of the 1,769 on board have disembarked MSC Magnifica since its Monday arrival at Marseille as the last MSC Cruises ship to come in. The rest of the passengers were to be off by Tuesday night.

None of the passengers nor any of the 927 crew displayed symptoms of COVID-19 during the ship's long journey.

MSC Magnifica was on what was supposed to be a 118-day world cruise that embarked passengers in Genoa, Marseille and Barcelona in January. The ship monitored the unfolding COVID-19 situation closely and adapted additional safety measures.

The ship was able to keep its scheduled itinerary for almost half of the cruise, until government restrictions impacted port calls. At Hobart, Tasmania, on March 14, the decision was taken to no longer allow passengers ashore to keep them from contracting the virus. Some opted to fly home from Sydney March 17 and Melbourne March 19, and a Sri Lankan crew member was allowed off in Colombo, along with a passenger medical (non-COVID-19) evacuation on April 6.

Apart from this, no one had been on or off in 40 days. Since a call at Wellington, New Zealand, March 10, only technical stops were made for fuel and provisions.

'I feel very proud about what we have accomplished as a company, as a big team — shipboard and shoreside — to protect our guests in this very difficult moment,' Capt. Roberto Leotta said. 'We continued to provide our guests the same level of service like on a regular cruise, in terms of food, beverage and entertainment. Furthermore, we engaged ourselves in a closer relationship with our guests. We became a big family, undertaking all together this very long journey back home.'

Ending its aborted world cruise, Pacific Princess arrived Monday at the Port of Los Angeles to disembark 119 passengers with no COVID-19 cases or illness on board. The ship had embarked on a planned 111-day voyage from Port Everglades Jan. 5. After Princess Cruises announced a pause in global operations March 12, Pacific Princess ended a segment of the cruise early on March 21, disembarking most passengers in Fremantle, Australia.

Of the 119 who remained on board, 109 were deemed, under IATA medical clearance guidelines, to be medically unfit to undertake a long-haul flight back to the United States, for reasons unrelated to COVID-19. Following Fremantle the ship made only service calls, at Melbourne and Honolulu.

Hanseatic Nature arrived in Hamburg early Monday morning, the first of four Hapag-Lloyd Cruises ships that are heading back to the company's homeport.

As earlier reported, Hanseatic Inspiration, Europa and Europa 2 are due in Hamburg May 2, while Bremen will remain anchored off Auckland, New Zealand.

Hanseatic Nature and Hanseatic Inspiration are scheduled to visit Blohm+Voss for repair work.

Oceanwide Expeditions' Hondius, meanwhile, arrived back at its homeport, Vlissingen, Netherlands, Monday morning, following weeks of sailing. The vessel was carrying only crew and staff.

Plancius and Ortelius are expected Thursday, bringing the bulk of Oceanwide's crew and guides who were still in the field.

Hondius was able to disembark all passengers in Ushuaia before COVID-19 closures began systematically, barring port stops in South America. This meant Plancius and Ortelius, a few days behind Hondius, had to hopscotch from port to port until Montevideo allowed the ship entrance.

Oceanwide said no passengers who disembarked in Montevideo reported COVID-19 symptoms, nor have any crew reported illness.

The New Zealand Cruise Association postponed its annual conference until next year.

The NZCA’s first annual conference was in Auckland in 2013 and every other year it has been held in a regional port. This year’s event was to mark Christchurch’s recovery from the devastating February 2011 earthquake and to celebrate the opening of the purpose-built cruise berth under construction in Lyttelton Harbour in November.