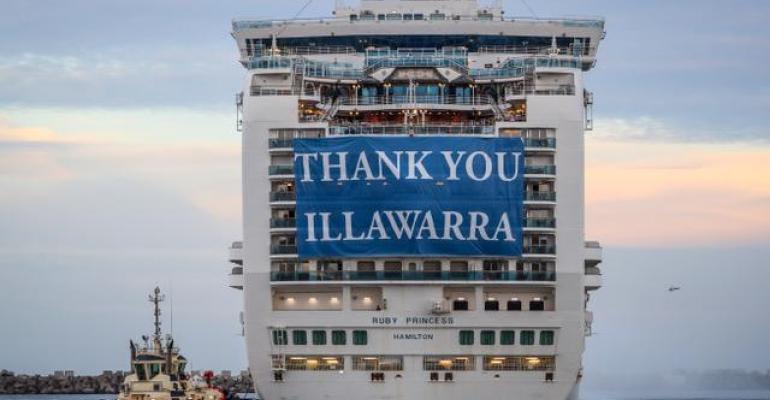 The banner refers to the ship's stay at Port Kembla since April 6
Here's a quick read of some of today’s coronavirus-related cruise news and announcements.

With the return of Plancius and Ortelius, all guides and crew aboard Oceanwide Expeditions' three main vessels have arrived back safely to Vlissingen, Netherlands, from the Antarctic season.

Hondius came in Monday after disembarking all passengers in Ushuaia on March 18, shortly before Argentine regulations made that impossible. Plancius and Ortelius had to divert, initially heading to Buenos Aires but once that port closed, too, they proceeded to Montevideo, Uruguay. In Montevideo, passengers were allowed to disembark between March 25 and 27.

At the time of disembarkation, all passengers, crew and guides were virus-free, according to Oceanwide. And, as of today, all returning staff have remained so, the company said.

A tug sending up a water salute escorted Ruby Princess as she set sail from Port Kembla late Thursday afternoon en route to the Philippines.

The ship had been in Australia for five weeks since it returned to Sydney from a round cruise to New Zealand on March 19, controversially disembarking 2,700 passengers before tests revealed some were ill with COVID-19. Since then Ruby Princess has been linked to 21 COVID-19 deaths and more than 650 infections and is the subject of a criminal investigation and a special commission of inquiry.

As earlier reported, an initial group of around 50 crew members disembarked Tuesday and were bussed to hotels in Sydney ahead of flights home on Wednesday and Thursday.

More than 300 disembarked Thursday and were taken directly to Sydney Airport for a flight to the Philippines that evening. Around 33 crew are in Sydney hotels to be cared for in isolation until being cleared by NSW Health to fly back to their countries of origin. Around a dozen are being treated for COVID-19 in hospitals.

It is understood more than 500 remain on board for the voyage to the Philippines, with planned stops in Indonesia and India to repatriate crew.

When she sailed, Ruby Princess had a huge banner hanging off the stern that read ‘Thank you Illawarra,’ referring to its location at Port Kembla since April 6.