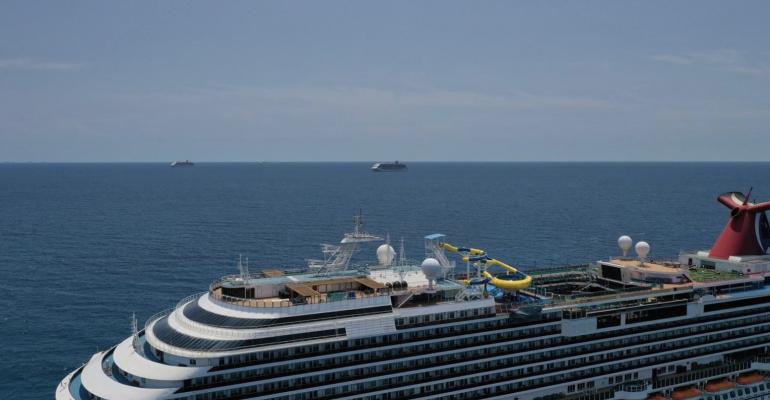 Carnival Dream and two other Carnival ships off the coast of the Bahamas, awaiting the arrival of additional vessels

Eighteen Carnival Cruise Line ships will rendezvous in the Bahamas over the next several days as the final plans are put in place to sail nine of the ships to repatriate more than 10,000 healthy crew members who remain on board due to restrictions limiting air travel to Asia, Africa, Europe, India and Latin America.

The ships have been at various US homeports provisioning and bunkering for their journeys. Certain crew will join ships using water shuttles off the coast of the Bahamas.  Once this is completed, nine ships will sail to their destinations with crew from North American-based ships on board.

The remaining nine ships will spend most of their time in anchorage positions in the Bahamas or Panama and eventually all ships will reduce their crew numbers to safe operational manning levels.

Carnival President Christine Duffy thanked the crew for their 'hard work, patience and understanding during this process,' and acknowledged the government of the Bahamas for their support of this operation, as well as the US Centers for Disease Control and Prevention,  US Coast Guard, US Customs and Border Protection and local port agencies.

Crew who will be returning home have undergone a health check and were cleared fit for travel by Carnival’s medical team. The company has been working closely with immigration officials in arriving countries on an efficient debarkation process. All crew have their temperature taken daily and will do so again during debarkation, and will follow enhanced protocols to ensure continued health.

10,000 will be homeward-bound on the nine voyages

Prior to Carnival’s pause in operations on March 13, its fleet of 27 ships had nearly 29,000 crew on board. Since that time, Carnival has repatriated more than 10,000 crew via flights and another 10,000 will be traveling on the nine voyages leaving this week. Approximately 6,000 additional crew will be repatriated by air charters or three ships that already departed from Australia and Long Beach.

By the time all these movements are completed, the Carnival fleet will be down to approximately 3,000 crew identified for safe operational manning, plus several hundred who, the company said, will be repatriated as quickly as possible.

Bahamas Paradise Cruise Line is dedicating its unused computing power to help researchers find a cure for COVID-19 via the [email protected] project.

'We have an enormous amount of idle computing power at hand, given our ships are currently restricted from their normal operations, and this program gives us a way to utilize those resources, helping researchers who are working around the clock to find a coronavirus cure,' said Oneil Khosa, CEO of Bahamas Paradise Cruise Line. Khosa is appealing to industry partners and peers to commit their resources to this effort, as well.

[email protected] is a distributed computing project that helps researchers conduct simulations to analyze the protein folding process and movements in various diseases, including COVID-19. The project enables scientists to use donated computing power from anywhere in the world to run simulations, study the virus and find a vaccine. The software is free and available to download for Windows, Mac and Linux, and the more computers donated to the cause, the more simulations can be run.

Bahamas Paradise joined the project in early April and has donated computer resources from its offices, as well as Grand Classica and Grand Celebration.

MSC Cruises extended its service suspension through July 10, from May 29 previously. Passengers on canceled sailings can apply the amount they paid to a future cruise through to the end of 2021.

Certain markets, like MSC Cruises USA, are offering a bonus 25% future cruise credit on top of that.

MSC also extended its Flexible Cruise Program to include all existing bookings for sailings between July 11 through September. This allows travelers to reschedule their cruise to a future departure date through 2021, at no penalty.