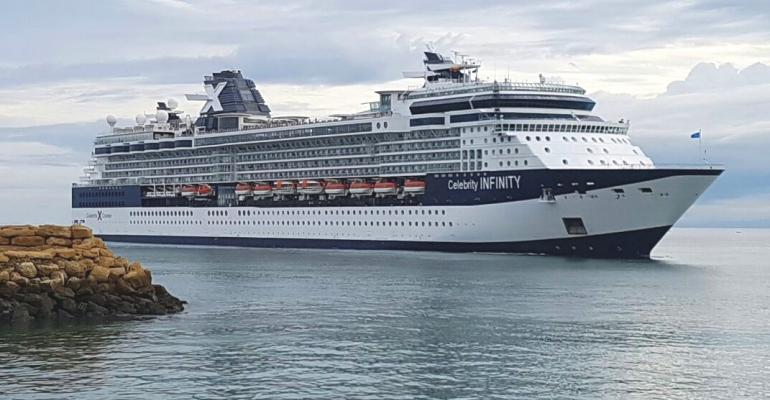 Non-working crew are confined to their cabins on Celebrity Infinity, which is carrying no passengers but has confirmed croronavirus cases among crew

Due to the impact the pandemic has had on Italy where Star Breeze is currently under renovation, Windstar Cruises canceled its 2020 Alaska program. 'We anticipate the Star Breeze will leave the Fincantieri shipyard in late July. The ship will spend its summer sailing in the Mediterranean before heading to Australia in the fall,' Windstar CEO Andrew Todd said.

The line also extended its suspension of operations and now plans to resume sailing May 22 instead of May 1.

Windstar added that as of today, to its knowledge no passenger or crew member has had or contracted COVID-19 during a Windstar cruise.

'We solved a humanitarian catastrophe': Trump

During the White House coronavirus briefing, Trump recounted how he had discussed the situation with Florida Gov. Ron DeSantis (who earlier didn't want sick people 'dumped' from Zaandam but subsequently backed down).

'We couldn't let them float aimlessly ... as they'd done for a long time,' Trump said.

Later, returning to the topic a second time, the president added: 'We solved a humanitarian catastrophe. No one else would take 'em.'

In an effort to mitigate the current economic challenges, Port Canaveral temporarily furloughed employees dedicated to the cruise operations and recreation business segments whose job functions are not currently required.

This temporary furlough is effective from today and expected to last until May 30, and pending the resumption of cruise operations. The impacted people will remain Canaveral Port Authority employees through the duration of the furlough.

Royal Caribbean Cruises Ltd. confirmed a fatality aboard Celebrity Infinity and the medical evacuation of two crew members from Oasis of the Seas. Neither ship has passengers on board.

The company did not answer other questions about a Miami Herald report, which included a Celebrity Infinity shipboard announcement stating that crew had tested positive for coronavirus.

Pullmantur Cruises extended global suspension of its cruise operations from May 2 until May 29, hoping to return to operation starting May 30.

Bahamas Paradise Cruise Line extended canceled sailings from April 8 through May 6 and said Grand Celebration will resume operations May 8. The updated 'Sail with Ease' policy provides a 125% future cruise credit for two-night cruise and Cruise & Stay customers affected by the extended pause in sailings. The credits apply to any future travel through 2021. Full refunds are also available.

Cruise & Maritime Voyages’ Columbus is currently sailing on a 7,842-nautical-mile repatriation voyage directly back to the UK. This included a technical call in Colombo, Sri Lanka, on March 23 and, having transited the Suez Canal, the ship will make a final technical call in Malta on April 6. Arrival at the London Cruise Terminal, Tilbury,  is expected April 14.

CMV has recorded no COVID-19 symptoms or health issues with any passengers or crew on Columbus. The ship was on a 120-night world cruise that departed Tilbury Jan. 6 when CMV announced a six-week suspension of cruise operations.

All other CMV cruise ships have returned to their homeports apart from Vasco da Gama, which is deadheading to Tilbury after offloading passengers in Fremantle, Australia, and Astor, which is sailing a repatriation voyage to Bremerhaven, Germany, scheduled to arrive April 12.

Existing and new bookings made during this period may be canceled up to 48 hours prior to sailing for a 100% future cruise credit to be redeemed for a cruise embarking on or before March 31, 2021.