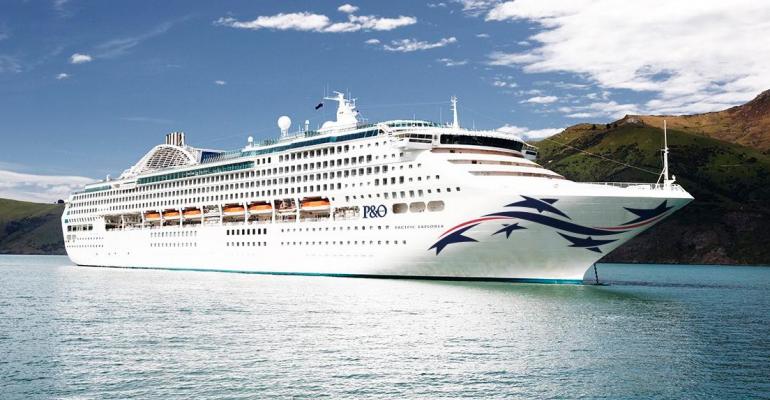 Pacific Explorer was ordered to leave by NSW Police

There were about 1,400 crew aboard Celebrity Apex when the first COVID-19 cases were detected. The number reached 157 on Tuesday, according to the regional health agency, and testing is ongoing.

Until Friday, 400 to 500 healthy crew had left the ship and been transferred to Paris Charles de Gaulle Airport, in accordance with parent company Royal Caribbean's commitment to repatriate them. That leaves about 1,000 on board but some won't be able to leave because of border closures. And about 200 crew will be needed to maintain the ship.

'Some people were dying on that ship and we needed to get them here as fast as possible,' Gimenez said of the late Friday night decision to accept Coral Princess. 'We have capacity here in Miami-Dade. If that changes, we will have to make some decisions.'

Coral Princess is carrying 1,020 passengers, 993 deemed — as of Friday night — fit to travel, and 27 not, and 878 crew, 38 with flu-like symptoms. Those with symptoms will not be allowed ashore but will remain on the ship untll they recover.

The fit-to-travel passengers are being screened and will go by motor coaches to the airport for charter flights or to a separate terminal area and then on commercial flights. All must wear masks and isolate for 14 days at home. Disembarkation is expected to take two to three days.

Although no one at Carnival Australia was available for comment, Seatrade Cruise News understands that Princess Cruises’ Sun Princess was also ordered to leave.

Furthermore, it is understood the company's other six homeported ships have left or are leaving voluntarily. They are P&O Cruises Australia’s Pacific Dawn and Pacific Aria, Princess Cruises’ Sapphire Princess and Sea Princess and Carnival Cruise Line’s Carnival Spirit and Carnival Splendor.

It is understood there are plans to repatriate the crews with chartered flights.

The 126-passenger Greg Mortimer, operated by Australia’s Aurora Expeditions, is still off Uruguay waiting for permission to dock at Montevideo.

The ship departed Ushuaia on March 15 for a 21-day round ‘South Georgia and Antarctic Odyssey’ voyage before the Australian government moved to ban people from travelling overseas.

She has since been sitting off Uruguay for almost two weeks with fears of a coronavirus outbreak on board. According to an SBS (Special Broadcasting Service) report, one passenger was confirmed with COVID-19 and others have developed symptoms, including the ship’s doctor and at least three crew members.

In a letter to the 96 Australians on board, Aurora MD Robert Halfpenny said the passenger with COVID-19 was in a ‘critically ill condition,’ but receiving the ‘best care possible’ in an Uruguayan hospital. ‘We and the governments working with us must find a way to get you off the ship as soon as possible,’ Halfpenny said.

Dream Cruises’ Explorer Dream, which recently completed an inaugural season in Australasia, is off Malaysia.

As reported here, the company has announced the ship will not operate a second season in Australia and New Zealand as planned between October and February 2021.

Dream Cruises said there are no immediate plans for the future, but it will be back.