Aranui 5 arrives in Sydney for the first time 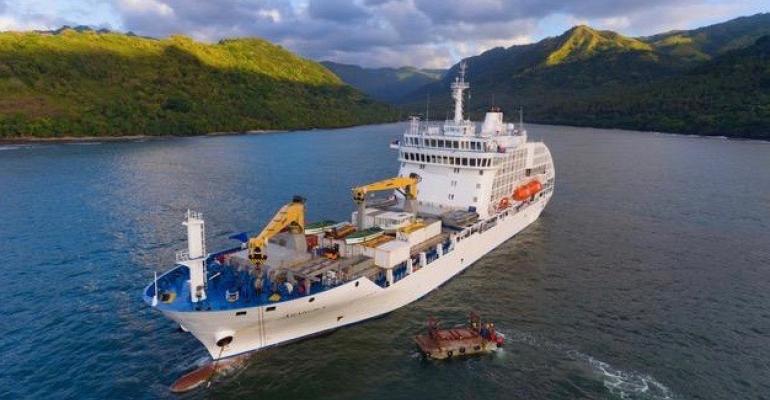 Aranui 5 at anchor in Nuku Hiva in the Marquesas where she delivers supplies
Aranui Cruises’ mixed freight and passenger vessel, Aranui 5, has sailed some 6,000km from Tahiti to Sydney for a scheduled drydock at the Royal Australian Navy’s Garden Island.

It is the first time the custom-built cargo-cruise ship has visited Sydney where she will stay until January 24.

The 254-passenger Aranui 5 made her maiden voyage around French Polynesia in December 2015.

She replaced the 200-passenger Aranui 3 which began service in 2003. As previously reported, there is no Aranui 4 as the number is considered unlucky by the Tahitian-Chinese owners.

The fully air-conditioned ship, whose name means ‘the great highway,’ has a restaurant, four bars — including the Sky Bar with sweeping panoramic views — lounges, a library, video and computer room, conference rooms and a boutique. There are two elevators, an outdoor swimming pool with a whirlpool and fitness and massage rooms.

As well as providing travellers with the opportunity to discover Tahiti and her islands, the Aranui service is also a lifeline, carrying supplies to remote villages in the Marquesas.

Aranui Cruises’ regional representative Australia and New Zealand, Laurent Wong, is taking the opportunity to showcase Aranui 5 to travel industry partners and media with a tour of the ship on January 21.

All guests will be taken from Sydney’s Central Railway Station and returned in a minibus to meet the security regulations of the Royal Australian Navy.