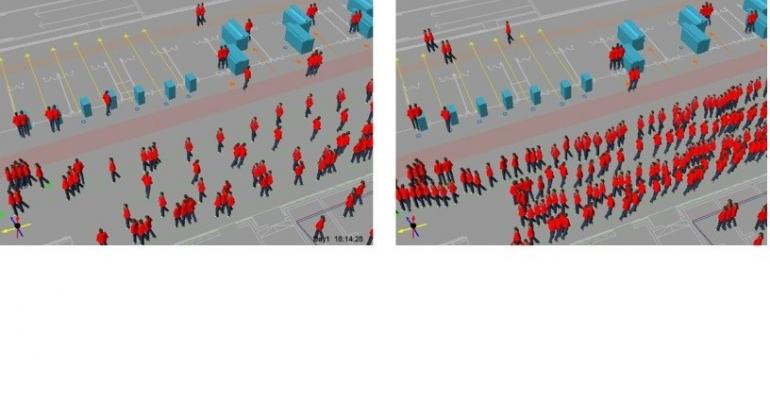 Bemello Ajamil & Partners' simulation program can reveal how social distancing and other protocols will impact cruise terminal processing
The best way to avoid COVID-19 on a ship is keeping it from entering the vessel. Therefore, the cruise terminal should be viewed as the last line of defense, according to a new paper by Bermello Ajamil & Partners that lays out a plan for homeport facilities.

Working together to get cruising restarted faster

Following up its 'Blueprint for a Healthy Cruise Industry,' B&A is using its significant resources in cruise port and terminal planning, design and operations to develop papers that continue a dialogue which President and CEO Luis Ajamil hopes will help cruise lines, ports and destinations work in a cohesive manner to get cruising restarted faster.

The Miami-based firm is also using its simulator to look at how new protocols will impact cruise terminals in order to anticipate what needs to occur.

Since cruise terminals are all so different, B&A said its guidelines need to be tailored to each location. In some cases, adapting existing terminals can provide maximum results while in others, more space will have to be made available.

Key points include changing floor plans and flows to accommodate the specific protocols mandated by government agencies or cruise lines themselves. Changes to the building infrastructure will need to provide for appropriate social separation and the maximum assurance to travelers that their well-being is greatly regarded.

There will be a need for supporting infrastructure to execute screening and sanitizing protocols for luggage coming on and off the vessel and for handling provisions at the interface between the port and the ship. Protocols to protect terminal and port employees and crew are other musts.

In future it may be that most passengers have been tested for COVID-19 ahead of the cruise and their documentation could be presented electronically in advance. B&A said these people could be routed to a green lane.

Those who don't have documentation could go to a red lane for individual screening with a combination of detailed questionnaire, visual inspection, additional temperature check and/or administration of viral test.

Temperature checks could be carried out via thermal cameras that can identify individuals in a group or in specific lanes. This can be linked to security screenings where temperature will then be automatically monitored for individuals. Those who fail the temperature screening would be escorted to an individual secondary screening room for further evaluation.

Secondary screening would call for a segregated zone, isolated by passenger and environmentally controlled. Since pooling people by temperature would greatly raise the risk of infecting that whole pooled population, B&A sees the need for clean rooms with individual, self-cleaning far-UV cubbies where people are cleared. They may be tested again and, depending on the outcome, allowed to board, transferred to a pre-arranged health facility or sent home.

For disembarkation, B&A said the challenge is providing safeguards and confidence to the community and country that ship travelers are arriving under the highest levels of health safeguards possible.

B&A said the new protocols could introduce the same level of standards as during embarkation. Passengers who maintained a clean bill of health during the cruise will be in the green lane while those with an issue would be segregated and isolated in the terminal.

For those in the green lane, the temperature screenings could occur as an invisible net throughout the terminal and in specific control stations. There might be a need to introduce an official to verify documentation at the exit.

Red lane travelers would go to an isolation room for testing. If negative, they can exit. If positive, they would be transported to the appropriate facility designated by the cruise line, port or regulatory officials.

Besides flows and specific facilities, terminal infrastructure will need to be adapted. B&A spelled out considerations for ventilation systems to maximize outside air or introduce HEPA filters with UV light protection.

Other elements include materials that prevent the virus from building up, the introduction of UV lights to prevent virus collection in high traffic areas and making everything as touch-free as possible, such as doors that open automatically and restroom fixtures that operate via sensors. Flows should channel groups of people through check points where staff can provide hand sanitizers.

Other specific items for consideration may include cleaning or purging fans, outside air placed on override instead of depending on CO2 levels (that can be slow to rise and depend on continued periods of high occupancy). MERV 13 filters may be considered for all air handling units.

Bipolar ionization on air handlers could reduce contaminants. Increased secondary ventilation, signage to hand-sanitizing stations, clear one-way paths to be enforced, plexiglass partitioning and use of facial recognition technology to minimize touch points and queues are other elememts to consider.

Isolation areas would need negative air equipment for temporary isolation of screened passengers requiring transportation off site. Wristbands or other technology could enable totally touch-free check-in, payment and access. Liners could be provided for items that go into screening machines.

Baggage going onto the ship and coming off will need to be sanitized. This could involve UV light, or special ventilation and application of disinfectants in a room. This might require the creation of a special treatment room at embarkation. Baggage coming off may be able to be treated on the ship for delivery directly to the luggage room for collection by disembarking passengers.

B&A said the treatment of provisions might require the ability to place all items in a confined warehousing space for exposure to UV light or other sanitation methods prior to loading onto the vessel.

Employees and visitors at the terminal also need to have a location where they can be screened and cleared to enter the facility. This may include verifying their credentials to ensure they have the right documentation and testing completed as well as a sanitizing room which might include UV lighting, shoe cleaning and other features.

In most terminals, employees use the same entrances and mix with travelers. B&A said it is important to continue to segregate them unless a certain level of sanitation can be achieved that is equal for both.

Crew are usually treated separately in most terminals and are provided their own area for disembarking which might include security, customs and immigration. B&A said these facilities will need to be revisited to provide for health checks on the same level as that of passengers, including an isolation area for anyone suspected of illness.

A key element of all COVID-19 protocols is maintaining distancing. B&A noted waiting rooms will not be able to hold as many people and lines will move at a slower pace due to the distance required between passengers. The firm's initial studies showed that ships at full capacity could take twice the amount of time to embark and disembark.

B&A reprogrammed its simulation software to analyze the impact and flows of new protocols, which it said will have a dramatic impact on terminal processing times and densities.

Terminals will have to operate with fewer people inside, and this will need to be evaluated to determine prescribed arrival times under various capacity scenarios.

This is can evolve over time since it is anticipated ships initially will operate at less than full capacity. However, B&A noted cruise lines need to quickly ramp up the capacity of the vessel as health concerns wane.

It could be that lines will accept that turning around a ship might take twice as long as before so ship speed may need to increase or port calls decrease. Or adjustments can be made to increase processing capacities at checkpoints, using simulation studies.

B&A noted many parties will be involved in developing the final plan for a terminal. At some point cruise lines will provide a protocol and other stakeholders such as governments or health agencies may give ports protocols, as well. Each line's protocols may vary, or perhaps guidelines won't be issued or they may be so general that specifics need to be worked out.

B&A strongly recommended simulations with various protocols to determine the capacity and timing, along with terminal reconfigurations. Terminal infrastructure will need to be reviewed and a capital plan devised for infrastructure, mechanical systems, terminal redevelopment and furniture fixtures.

And ports must decide who will operate the health checkpoints which might involve health screening, temperature checks and testing. During embarkation, this is typically controlled either by the cruise line, its ground handler or the terminal operator. B&A suggested the duties easily could be added to the security protocols already used, which might involve a contractor.

For disembarkation, B&A said it is important to understand if there will be governmental participation from public health agencies. If not, the port will need to determine who is responsible for the final evaluation of a passenger disembarking and where in the sequence will this will be done — as people leave the ship or before they exit the terminal.

See also Seatrade Cruise Talks' 'Steps in Getting the Cruise Industry Up and Running,' featuring port-related insights from Luis Ajamil.