Bahamian paratriathlete Erin Brown is Odyssey of the Seas' godmother 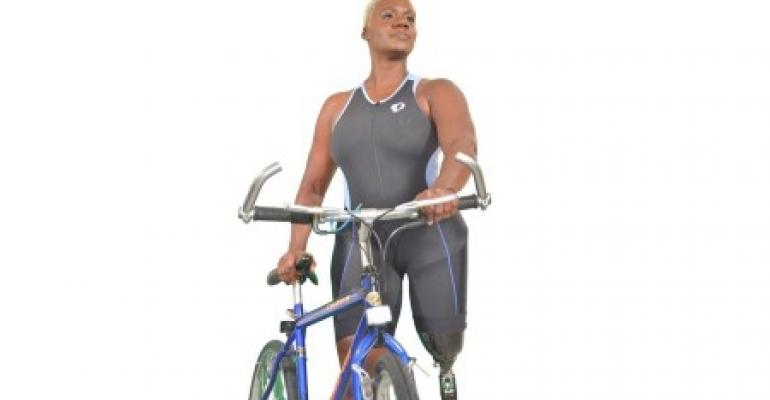 Erin Brown, a Bahamian who lost her leg to cancer and went on to become a paratriathlete, will serve as the godmother for Odyssey of the Seas.

The Royal Caribbean International ship will be officially named during Nov. 13 festivities at Port Everglades.

Brown competes at the international level.

'From the moment we heard Erin’s story, how her courage and determination inspired others and led to a more inclusive consciousness about succeeding with disabilities, we were moved and knew she was a natural choice for godmother of our newest ship, Odyssey of the Seas,' said Michael Bayley, president and CEO, Royal Caribbean International.

As a collegiate track and field athlete, Brown was diagnosed with a rare form of bone cancer, osteosarcoma, after suffering a fall that resulted in a broken leg. After more than a year of chemotherapy, her tumor showed no signs of shrinking, and Brown made the decision to amputate her limb above the knee.

Brown, now 41 and a mother of two who watched her own mother struggle for five years before losing her battle with lupus linked to cancer, knew she had to keep going because her family depended on her. 'Mind over matter,' she repeated. And then, she reinvented herself.

The first time Brown completed the 100-mile cycling event in the Bahamas, Ride for Hope, to raise money for cancer research, education and prevention, she led a group of adaptive athletes who heard the thunderous applause and cheers from the crowd.

'A sudden change like the one I experienced is just an opportunity to rebrand yourself to yourself and to society. All those skills you had before — you still have them,' said Brown, who has gone on to become an advocate for disabled rights and works at the University of the Bahamas as the compliance officer and counselor for those living with disabilities.

Bayley added that having a Bahamian godmother is a way to pay tribute to the Bahamas, Royal Caribbean's first international destination more than 50 years ago.