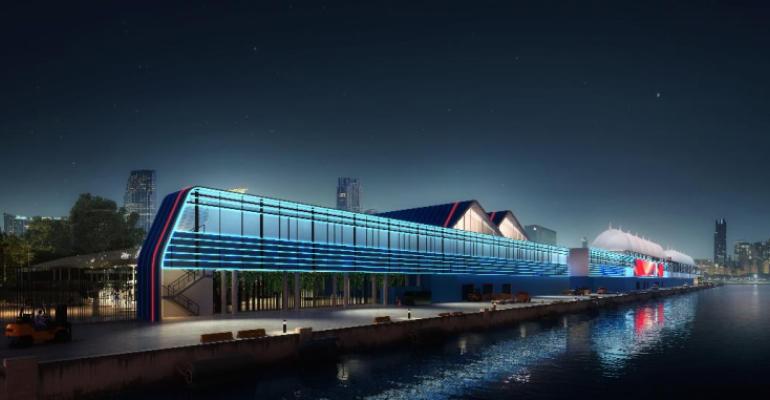 When completed, it will be the third cruise terminal at PortMiami dedicated to Carnival operations and the cruise line’s largest in North America.

Existing buildings will be renovated and blended with new structures to create an integrated cruise facility that provides a seamless traveler experience from curbside to ship. BBA’s design renovation creates a single passenger experience that is directional and proceeds orderly through a sequence of carefully thought-out spaces. Natural light is used as an element to engage travelers, while colors and patterns are drawn from tropical landscapes and the sea.

‘The design draws inspiration from maritime architecture, the terminal’s prominent location fronting the MacArthur Causeway and Miami, a city that feels the pulse of the Caribbean,’ BBA Founding Principal Gustavo Berenblum said.

A new exterior canopy system will serve as a transition between passenger drop-off and the building scales, as well as between exterior and interior. With its translucent white canvas roofs and painted metal structure, the canopies serve to orient the passengers while protecting them from the elements. At night, canopies and metal cladded facades fronting the south elevation of the terminal will be illuminated, conveying a unified, modern and sleek iconic image.

‘The design intends to create a unique sense of place using innovative structural and canvas material for the canopies. This achieves a visual relationship with the existing tensile and canopy roofs of Terminal F,’ Berenblum added.

Terminal F’s north façade will be illuminated with continuous linear LEDs mounted at intervals across the unified length of the terminal to accentuate the horizontality of the project and illuminate the new structure to make it visible from the MacArthur Causeway. A translucent media mesh will be placed directly below the white canvas roofs to display captivating imagery to passersby, while allowing light to enter the terminal during the daytime.

The roof’s design curves at two moments, creating a ripple waveform effect from the south façade while allowing generous amounts of light to enter the building from the north through additional glazing. The roofs will be seen from the cruise ships and will be integrated aesthetically, effectively becoming a fifth façade.

BBA designed the terminal’s interiors as transitions between buildings, defined by large video or light walls, creating passenger excitement as they anticipate embarking on their voyage. Curvilinear shapes, white and wood tones with splashes of deep blue and white painted steel recall ship architecture and infuse a maritime spirit.

‘Terminal F will be a building for the 21st century that is thoughtful and consistent with today’s rigid requirements, showcasing PortMiami’s commitment to quality and cruise guests,’ Berenblum said.

All renovations are set for completion by October 2022 to welcome the Carnival Excel-class ship arriving in late 2022 and in time for Carnival’s 50th anniversary.