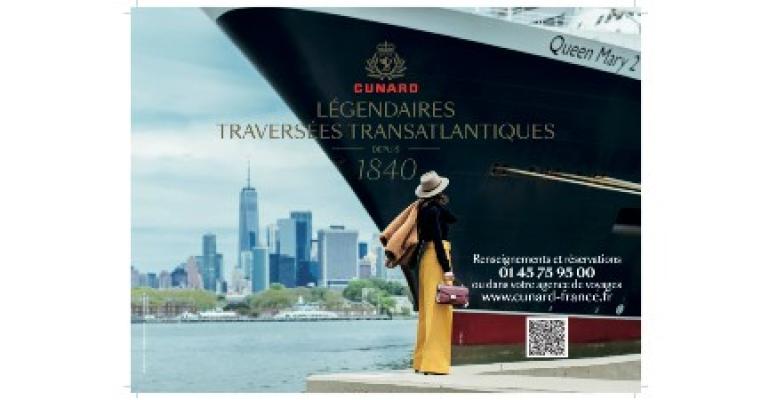 For the first time, Cunard will make a big splash in France with a major advertising campaign Jan. 24-31 focused on the Paris Metro.

On the initiative of its Paris-based general sales agent for France and Monaco, Un Océan de Croisières (UOC), the campaign will highlight trans-Atlantic crossings with visuals emphasizing the glamour of Cunard and its ships.

Three main Paris Metro stations – Opera, Pont de Neuilly, Chaussée d’Antin – and 120 others located in the business areas of the capital will display the same 4 by 3 meter posters featuring Queen Mary 2. National print advertising will back up the effort.

The campaign was conceived and orchestrated by So Between, a communications agency belonging to the UOC group, which also represents tour operators, hotels and destinations.

The art of cruising

The advertising aims to 'highlight the art of cruising in its purest tradition. Cunard perfectly illustrates the harmony between a unique heritage and the expectations of today’s passengers. Cunard’s elegance is a real call to travel,' UOC President Sophie Baillot said.

'Moreover, this campaign allows us to put a focus on 2023, which celebrates the company’s 100 years of world voyages and to introduce Queen Anne, its new ship to be launched in 2024.'

With French support, lecturers and musicians, this unique Queen Mary 2 departure is scheduled on May 19. More crossings between Southampton and New York, as well as a range of cruises around the world. are to be found on the Cunard France website and in dedicated French brochures.