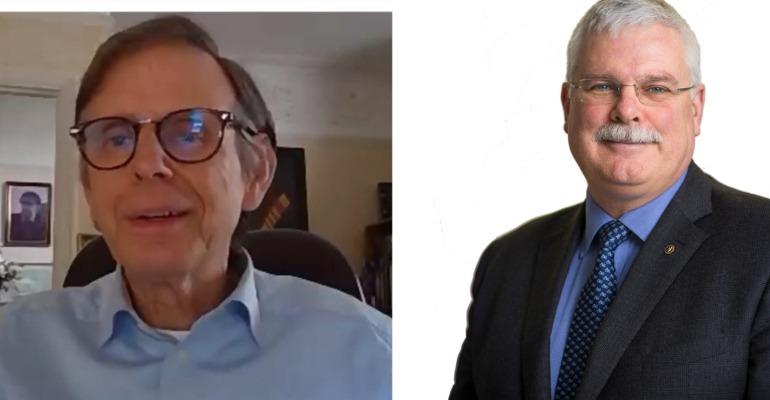 Dr Martin Stopford, President Clarkson Research, says urgent development of biofuels needs to be undertaken by the maritime sector as he set out a roadmap to zero carbon emissions by 2050.

In discussing existing renewable fuels, Luo Xiaofeng, director, China Classification Society (CCS), Wuhan Rules & Research Institute, claimed ammonia was not an ideal option for cruise ships. ‘Ammonia, [in the cruise industry] is a big challenge. The smell… is not a good experience', he commented.

Biomethane was considered an option, Stopford said, for meeting environmental standards over the course of the next two decades.

Tom Strang, svp, Maritime Affairs, Carnival Corp & PLC, said he saw a ‘pathway’ for LNG, which is ‘the only scaleable fuel’ but added that ‘it doesn’t lend itself to the most efficient installation' and that the ‘support infrastructure of LNG is still very challenging.’

On Carnival’s adoption of LNG, Strang commented, ‘It’s been a very interesting journey for us and the cruise industry to move to a gas-fuelled vessel. We clearly made these decisions before the current focus on decarbonisation and looking at the IMO 2020 requirements.

‘When we started, there were two LNG bunker vessels in the world. Now there are nine and more coming depending on the rate that they come out of Singapore and China, and we see it as an important stepping stone. The challenge has been developing the supply chain.

‘But clearly we are limited by the number of locations where there are bunker ports available.

‘If we look forward to hydrogen and ammonia then there’s a massive effort that’s going to be required to build a bunkering infrastructure.’

There was a consensus for the advantages of LNG, but Xiaofeng claimed, ‘hydrogen is the way, clearly.’

Stopford discussed generating low emission designs based around the diesel engine. He also pointed to the environmental advantages of retrofitting digital and fuel saving technologies that lower emissions and costs. Reducing the size of vessels and improving hull services (in combination with lowering speeds i.e. to 10.5 knots) could save 40% on energy, he claimed.

‘Design is the first point to minimise power consumption so we believe this is a very important step towards low emissions’, said Wang Jinbao, researcher in ship hydrodynamics, MARIC and deputy director of SSNAME, who was the moderator for the discussion.

Stopford stated that emissions scenarios revealed the IMO 50% emissions target could ‘easily be achieved and surpassed by 2050.’ Nevertheless, he noted the difficulties of obtaining green fuels when they are in high demand around the world and  likely to be limited and expensive – which means maritime may fail to qualify.

Stopford pointed to gas and hybrid being stepping stones to all-electric ships when zero carbon fuels are available, and urged the development of a wave of gas and hybrid vessels for markets where suited and commercially viable. He added that there needs to be a ‘focus on doing the things we know we can do, whilst preparing to do the things we can only do, if we get the fuels to do them!’