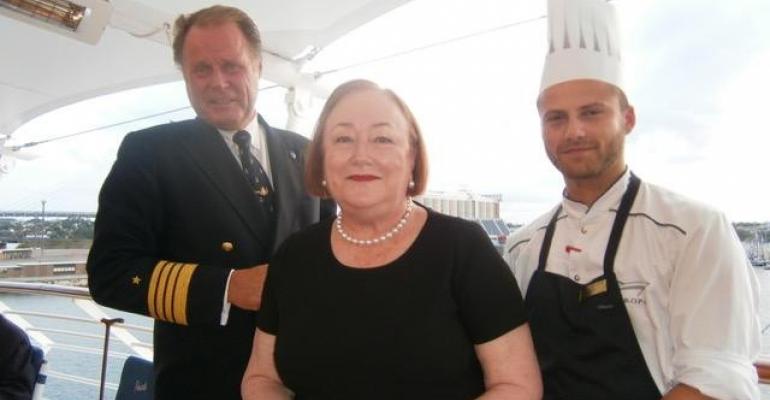 Capt. Dag and Diane Patrick with chef Daniel Liebl of Pearls aboard Europa in Sydney Harbour

Dvergastein began his career with Wilhelmsen, the company that owned Wiltrans, which Patrick and her late husband James bought in 2002.

Dag is one of the best known international cruise ship captains in Australia. He has come Down Under countless times, serving in Sea Goddess I, Song of Flower and Seven Seas Voyager before joining Seabourn and Holland America Line ships.

Brought out of retirement

He was master of Prinsendam when he retired a year ago, but Hapag-Lloyd brought him out of retirement to command Europa, which underwent a makeover last October, including the introduction of two new restaurants.

Pearls and The Globe

Dvergastein showcased them both on Wednesday night, with the first courses in Pearls, where heaps of caviar are served with every dish, with more to come in The Globe, the restaurant at sea by three-star Michelin chef Kevin Fehling of The Table in Hamburg fame.

Europa sails for Melbourne Thursday evening and visits Burnie, Port Arthur and Hobart in Tasmania before heading for New Zealand.